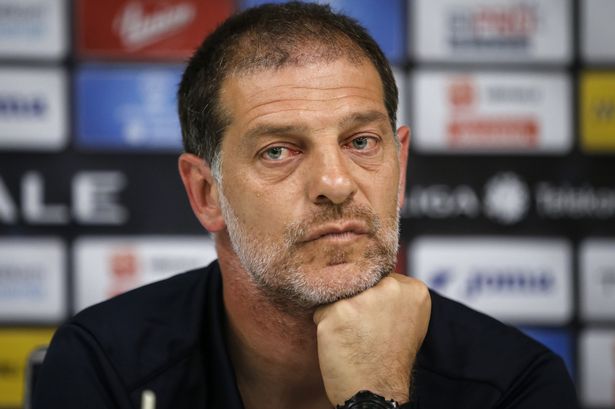 How were you feeling when you found out that Feghouli’s red card had been rescinded?

“Of course I was happy yesterday when I heard the news, but then it’s the fourth time so you know. It’s like a new record. We’re happy about it, but as I have said it’s four games. The decision was clearly against us. If you add a couple of times minimum where the players were punished after the game like Aguero this season against Man City, it’s 6 games.”

Tomorrow is West Ham’s fourth match in just eleven days, will you be rotating the team?

“It was more rotated for the game against United where we had 2 games in 3 days (League followed by cup) now there is a gap. I’m not saying there will not be changes, but from Monday until Friday is like a normal gap between the games and after Friday we have the next Saturday against Palace. We have big ambitions of course when you play home against Manchester City, the big clubs. We’re going to put a strong side.”

How serious are you about bringing Defoe back to West Ham?

“We are not going to discuss players that aren’t ours at the moment. The whole club, the chairman is trying really hard to get some players. This is going to be possible in a position that we think we need, but I’m not going to talk about names in public.”

“I said last time, he has the things that are most important in football games: goals. He scored last year, he’s the main reason he stayed up and he continues to score this season. Every game he’s scoring goals. Most of the chances he’s converting them to goals, he’s an excellent player of course.”

What about Scott Hogan in the Premier League?

“He’s not on our roster so that’s it basically.”

Has Zaza played his last game for West Ham?

“Zaza came to West Ham, he wanted to come. Maybe he wanted to stay in Italy but because of his contract here his story is finished. He is still our player, but at the moment he will leave but mainly because of the situation in his contract. That’s it with West Ham.”

It’s a shame that he never scored for West Ham, why has he failed so much?

“It happens in football. He’s definitely a good player. It just wasn’t to be. Because of that clause in his contract he had to make a big impact. With many players, it takes a few months or even a year to adapt to the Premiership. Unfortunately, he came at a time that the team wasn’t playing well. Unfortunately, we had to judge him on our first 6-7 games which is not a big time to judge a player in general. What I’m trying to say is he’s definitely a good player.

What about Calleri? Has he played his last game?

“Not necessarily; he’s got a different contract. Both of the players are on loan for one season, but with Calleri there are no conditions in that loan.”

Have you thought about bringing back Enner Valencia?

“No. We haven’t thought about that.”

“Don’t give me names. I know it’s the transfer window and it’s an interesting time for the media and the club but we want to keep it quiet as much as possible. Basically, the principle with us, as with many other clubs, is to keep it quiet until it’s finished one way or another.”

Manchester City in the FA Cup, what kind of game do you expect?

“I’m not concentrating on Man City apart from the game. They had a brilliant start this season, and they slowed down a little bit. All the other teams hit form like Chelsea. It’s a big game for us, it’s a big game for them, it’s the FA Cup. I’m sure they’re going to put a very strong team out tomorrow because it’s also a big chance for them to get a trophy. As I said, maybe after the great start they had some people had expected them to cruise in the league specially after the start but it’s not easy in any league even more so here. We can’t say they’re struggling but they are 10 or 8 points from the top which is not what they expected. They have a long-term plan.”

How much of an affect is the AFCON going to have on your squad? (Ayew and Kouyate out)

“It’s a big loss of course. It’s 2 very important players that we have lost. We have to go through the games without them and hopefully they both come back fit to jump straight back into the team. There are other clubs that have more players in AFCON and some clubs with no players there but we have to adjust.”

Is it up front that you have to strengthen the most in the window?

“We have a couple of positions that I have discussed with the chairman, Tony Henry and my staff for a long time. I believe in the squad that we have, that’s my squad and they have enough quality, strength and character to finish the season well. Of course, extra quality is always good to add to the team specially in the league that is likely where you will miss your players through injuries and suspensions. The core of the squad is very good and I believe in them.”

The United game was a good performance. Do you think that they are getting their confidence back from last season?

“I think definitely yes. The matches against Burnley and Hull weren’t great performances in terms of quality on the ball but we got 6 points. In the last 2 games, we played really well against Leicester and United even with 10 men. There are lots of positives which is why I am optimistic. Despite defeat and not getting any points, it’s very convincing.”

Do you think Pep underestimated the Premier League?

“I don’t know. La Liga and the Bundesliga are very competitive. With Bayern Munich, you are more likely to be a champion but you have Dortmund and very difficult games during his time there. None of the games were easy. With La Liga it’s not that you’re guaranteed to win the title, he didn’t win the title in every year with Barcelona. You have Real Madrid, Athletico Madrid who are flying and there is always Valencia, Sevilla, Villarreal who are all difficult games. He knows the intensity in the Premier League and was well prepared that it would be a difficult season. I don’t think he expected anything less than what has happened or what he has faced so far. I think he only believes so strongly in the way his teams play football and he doesn’t want to change it because at the moment he doesn’t look so fluent in the ways he brings it to the pitch. He knew it was going to be very hard and he was well prepared for the Premier League. As for all the big coaches, no matter how many people tell you, until you feel it you think it isn’t going to happen to me.”

Did you see his interview after the Burnley game? Do you think that it’s the pressure that’s getting to him?

“Yeah. Maybe he was just tired after a couple of games in 3 days and after a game that looked good to them on paper. After the red card it became difficult for them, then when they scored that goal that was maybe from his point of view a foul, he was probably tired.”

What does the FA Cup mean to you this season?

“Of course the Premier League is a priority but we are obviously dreaming about trophies and thinking about them. It’s more likely that we are closer to getting a trophy than the league like most of the clubs. It’s a big ambition for us, it’s a big competition for us and we have a very difficult draw. The EFL Cup was the same we had Chelsea and then United but this year is like that. We’re playing at home and I’m sure they want to approach this cup very seriously. We are positive because our form is good now. As I said to the boys after the United game, we are disappointed to lose but if we play like this we have a chance in every game.”