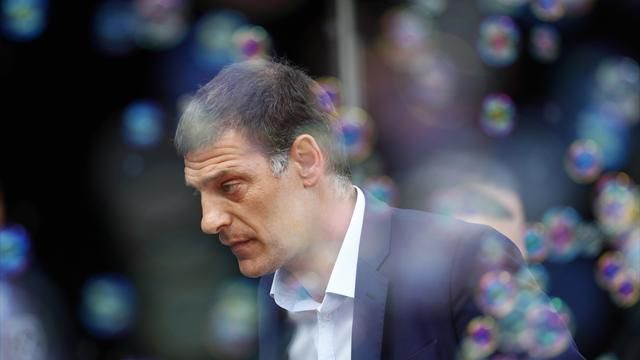 Slaven Bilic has two games to save his job as West Ham lose patience with their manager. Bilic has to deliver in the Premier League matches against Crystal Palace and Middlesbrough or he will be dumped by the frustrated Hammers board.

A three match winning run in December saw West Ham climb away from the relegation zone but two straight league defeats have followed. But more worrying for the club’s board has been the alarming way his team have caved in when they have conceded five goals against Arsenal and City over the past month. In both matches the side has collapsed and shown a worrying lack of character and commitment.

Co-owners David Sullivan and David Gold along with vice-chairman Karren Brady are losing patience with the way the side have struggled compared to last season with the same players available. They are worried Bilic has lost the ability to motivate his squad and are concerned after hearing stories of a lack of focus and quality in training.

While earlier in the campaign the team were beset by injuries to key players, Bilic has been able to work with a largely full-strength group for the past two months. And there has been no obvious up-turn in performances from the side since then, which has left the Hammers board mystified as to what has gone wrong.

Palace visit the Olympic Stadium next week with former boss Sam Allardyce keen to put one over his old club.A trip to struggling Middlesbrough then follows – and Bilic will be on his way out if results and form are not delivered.

Brady was even forced to take to Twitter on Saturday morning under growing criticism from West Ham fans over what has happened this season. She said: “The whole board know last night’s performance ws not good enough, we know we have to improve. Palace and Boro now vital games.

the whole board know last night’s performance was not good enough we know we have to improve, Palace and Boro now vital games. 1/3 https://t.co/JhUlniSQV6

we lost no key players from last season & we struggle to understand why team is under performing BUT urge every supporter get behind team2/3 https://t.co/JhUlniSQV6

“We lost no key players from last season and we struggle to understand why team is underpeforming, but urge every supporter to get behind team and manager.

“We know it is hard to take positives out of last night but we believe the manager and the players will sort it out for next week.” www.thesun.co.uk/sport

So, if this report is to be believed, our current boss is yet again under pressure to keep his job. Clearly something has gone drastically wrong this season and no-one has yet found the answer to what that is. There are of course many theories as to what has gone wrong;

I’m sure there are many more things to add to this list. But just looking at the above, it’s not hard to see why we are struggling for any find of consistent form. Just look at the amount of goals we are shipping. It is ridiculous! Especially the heavy defeats. I don’t believe that the board will sack Slaven and it would be a shame if they did because most seem to genuinely like the man. A comment I recently saw online made me think. It said ‘Bilic reminds me a lot of Gianfranco Zola’. I think that assessment is spot on actually. Zola was quite well liked when he first arrived. He was happy and truthful. He had a fairly decent start, but then it all went wrong. We were losing, He looked drained and tired, he started losing his hair, he lost his sparkle…..Are you seeing any comparisons here?

I do not believe that we will be relegated this season. But I do think we may just limp along to close to the relegation zone seeing out a disappointing season. Whether we show any signs of recovery and fight will be interesting to see. I am hopeful, but not optimistic.

What do you think? Do you still ‘trust in Slav’? What has gone wrong with our season? What do you think needs to happen? New boss? New players? How can we fix our problems. Thanks for reading 🙂