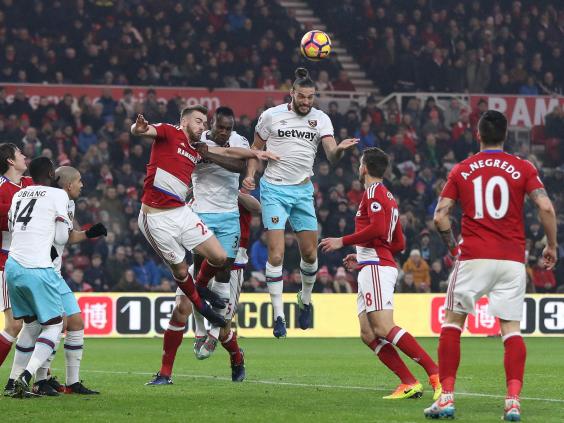 West Ham defeated Middlesbrough 1-3 today at the Riverside to climb to tenth in the Premier League table.  A pair of first half goals by Andy Carroll, and a late third by Jonathon Calleri gave the Hammers their second consecutive victory since the Dimitri Payet trade demands were made public over a week ago.

The first half was great football as a stand-alone match.  Both sides played smart on all thirds of the pitch.  Early on Andy Carroll started the scoring when he rose above the crowd and headed in Manuel Lanzini’s corner kick.

Ten minutes later Aitor Karanka’s men equalised as Chambers squared it to an unmarked Cristhian Stuani, who tapped it in from six yards out.  Much of the remainder of the opening half was back and forth with no one able to take the lead.

In the closing moments of the half, Michail Antonio’s shot was poorly handled by Victor Valdes and Andy Carroll was able to put the rebound into the back of the net.  Retiring at the break with a 2-1 lead under the floodlights of a loud Boro crowd, West Ham looked for more.

The second half opened and Antonio almost had a goal in the opening minute when his header from Sam Byram went a yard over the crossbar.  Soon after, Mark Noble went down with an injury.  The West Ham skipper came back on the pitch but after a minute or so of limping about he was replaced by Edimilson Fernandes.

Middlesbrough’s best chance to equalise came in the 58th when Darren Randolph dove to stave off a Marten De Roon header that was certainly heading inside the post.

Andy Carroll left the pitch midway through the second half with a bit of a groin injury.  His three goals in two matches have shown his importance to West Ham’s attack.

In the late minutes of the match, Karanka brought on another striker in Rudy Gestede and Bilic answered by bringing James Collins to hang on for the 2-1 win.  Even with a more defensive set up, Jonathon Calleri was able to take a pass from Lanzini and score off a Clayton deflection.

With the late stoppage time goal, West Ham sealed a 3-1 away victory and showed their determination to succeed without Payet (and Kouate and Ayew as well.)  The big news this week will be to see the health of Andy Carroll and Mark Noble.  The two have been very important to the recent run of good form that the Hammers have shown over the past few weeks. With a week to rest before hosting an inconsistent Manchester City side, hopefully Bilic will have his best XI ready to continue a well-needed run of victories.