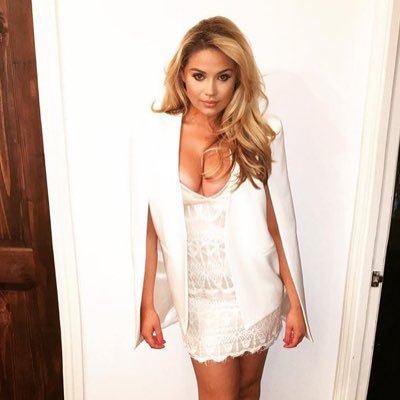 After our second crucial win in a row I think it’s safe to say that us Hammer’s fans have certainly got something to smile about. The points are obviously crucial, but more importantly, we are gaining back our West Ham Way. The players have been smiling during games, running the length of the pitch, trying to get on the end of every ball and celebrating in style with the fans and (in some cases) ball boys! It has taken me a bit of time, but I’m starting to feel excited again.

I was lucky enough to spend the last ever season at The Boleyn Ground as a Hostess in the corporate area – some of you may even have had the pleasure of seeing me there! Coming from a West Ham family you can only imagine my Dad’s pride when he could tell his mates that I was working at our club. Unfortunately with the move to the Olympic Stadium, us Hostess girls could not go over, which left a massive hole in my Saturday’s. I missed seeing everybody and getting my Nathan’s Pie n Mash.  Although I have a season ticket (Bobby Moore Upper!) at the London Stadium, I just hated watching as a fan and not being involved behind the scenes any more.

Luckily for me, I was asked by an anonymous twitter account that some of you may know, to come and help out at the West Ham Way pre match events.

The events are held at arguably one of my favourite places – The East Ham Working Mans Club! Us Hostess girls used to always go down there after a game, and were sometimes even joined by a few of the legends! Everyone congregates upstairs where the guys set up a stage with a sound system that blasts out all our favourite songs – don’t worry, I don’t decide what we play. Once you’re upstairs, it’s time to get yourself comfortable on one of the many tables, and take full advantage of the unlimited beer and cider from the lovely ladies behind the bar. There is also pie n mash available to buy if you are feeling peckish.

About an hour in, Mark Ward will officially announce that tickets are available to buy for the raffle and that is when me and Bekka walk around chatting to everybody and handing out the tickets! The prizes have been great every week, and with 5 winners each event it is always something to look forward to, even if it’s just the banter between Wardy and the lads when he is calling out winners. 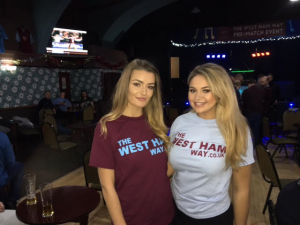 Possibly everybody’s favourite part of the event is when Mark Ward holds a question and answer session with a former player, where nothing is off limits- and that’s just Wardy! Fans are also welcome to ask questions before getting photos and autographs (myself and Bekka are more than happy to help with the photo taking!)

After the Q&A, we officially announce raffle winners, and normally have about 30 minutes left to get the last rounds in before the coaches set off to take everybody to the stadium. The coach journey is actually one of my favourite parts of the day, but be warned I always claim the back! Last week we even had Steve Lomas jump on with us which i am sure was a little bonus for those sitting with him!

If you aren’t going to the game, that doesn’t matter. The Working Mans Club broadcast the game on a big screen, and after watching it there last week I can say it is a lovely atmosphere that attracts nice proper West Ham fans.

Still not convinced? I get it, I mean, who would want to meet former players, win West Ham prizes, have unlimited drinks, mingle with other fans AND get your transport covered to the stadium…

The next West Ham Way pre match event is on Sat 11 Feb with special guest John Moncur! I can already tell it’s going to be a lively one.  Get your tickets here:  http://bit.ly/TWHWTICKET5