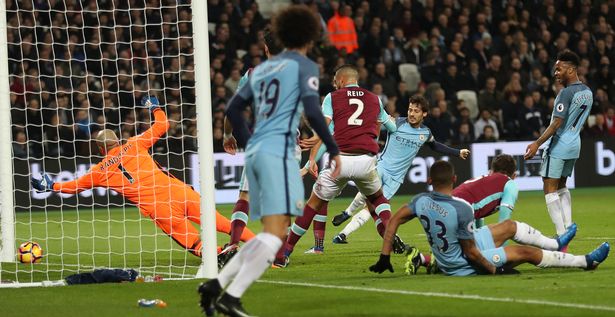 West Ham fell to Manchester City 0 to 4 today during a rainy early-February Premier League match at the London Stadium.  The poor showing for the hosts was eerily similar to the 5-0 embarrassment West Ham endured during their January 6 FA Cup match in East London.  That loss was partially blamed on team resentment of now transferred Dimitri Payet.  The causes of this defeat was more complicated and seemed to be rooted in pace and general desire from the host club.

The Hammers were unable to stop the bleeding before the halftime break.  Losing possession to Sane in dangerous territory, Sane found Raheem Sterling, who found Jesus for his first Premier League goal.

Mercifully, the halftime whistle sounded and Bilic’s team could regroup.

The second half saw West Ham manage to hold serve through much of the opening.  While the Hammers never threatened much, they did keep Randolph out of danger for the first 20 minutes but in the 66th minute of play Raheem Sterling was challenged by Fonte and referee, Kevin Friend, awarded City the penalty kick.  Yaya Toure’s kick from the spot was true, and City had a comfortable 4-0 lead.

Slaven Bilic’s side tried to save some face with some attempts late in the match.  A Sam Byram cross was blocked by Jesus’s arm late in the match but no penalty was awarded.   The only positives to the second half were spirited efforts by Robert Snodgrass and Edimilson Fernandes off the bench.   Otherwise, West Ham were completely outpaced by Manchester City.  Even with Bilic using four in the back, the visiting club had no problem finding space and really could have scored a more goals had Guardiola not “called off the dogs” after Toure’s penalty kick.

West Ham has little time to dwell on this embarrassment.  Saturday they travel to St. Mary’s Stadium to face Southampton.  The Saints sit one point behind the Hammers on the table and this is a vital match to determining West Ham’s final position in the table.

Coming off of a good run in the Post-Payet world, admittedly against lower-level competition, the Hammers need to find some spirit this weekend.  Hopefully a near return of Kouyate and Ayew from their national team duty will provide some pace to a club that, one day after the transfer window closed, still can’t run with some of the top teams in the league.