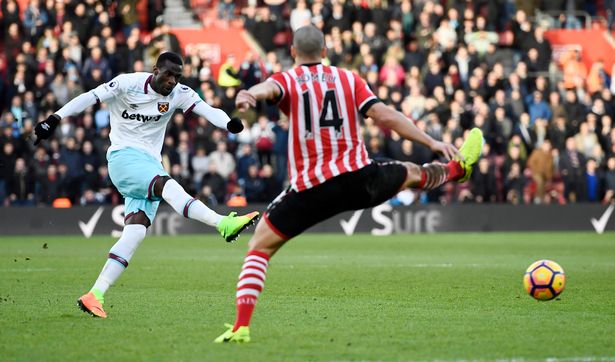 The Hammers got back to winning ways this afternoon with a 3-1 victory at St Mary’s, which was their first win there in seven attempts.

Deadline-day signing Manolo Gabbiadini fired Saints ahead just 12 minutes into his debut, but that was as good as it got for the hosts.

Andy Carroll equalised within two minutes with his 6th goal of the season, Pedro Obiang added his first ever goal for the Irons and a Mark Noble free kick via a deflection from Steven Davis gave the visitors their sixth win in nine games.

It also meant a winning return to the south coast for former Saints captain Jose Fonte, who left to join West Ham a fortnight ago.

Jay Rodriguez’s speculative ball somehow caught out the West Ham defence for the opening goal, looping over Fonte and Cheikhou Kouyate into the path of Gabbiadini with claims of offside from Winston Reid amongst others.

The £17million new boy still had plenty to do as he cut in from the left but his powerful angled drive rocketed past Darren Randolph and in off the underside of the crossbar.

Within two minutes the Hammers were level.

Saints keeper Fraser Forster did well to beat out Aaron Creswell’s shot before the left-back’s cross found Sofiane Feghouli, who could not convert at the far post.

At the other end Gabbiadini glanced a Cedric Soares cross wide, but when the crucial second goal did arrive it came from an unlikely source.

A minute before half-time Robert Snodgrass’ corner was headed out to Obiang, who was 30 yards from goal.

The Spanish midfielder, sent a low drive through a crowd of players which seemed to deceive Forster as it crept inside the far post for his first Hammers goal.

Saints came out after the break determined to claw themselves level, with James Ward-Prowse forcing a sharp near-post save from Randolph and Cresswell denying Gabbiadini a second with a vital block.

But seven minutes after the restart West Ham won a free-kick down the left, Mark Noble swung it towards goal and Davis stuck out a foot to inadvertently hook the ball into his own net.

Gabbiadini had the chance to pull one back but skied his effort from 12 yards out and Randolph held Davis’ drive to secure a welcome three points and lift the Hammers back up to into the top half.