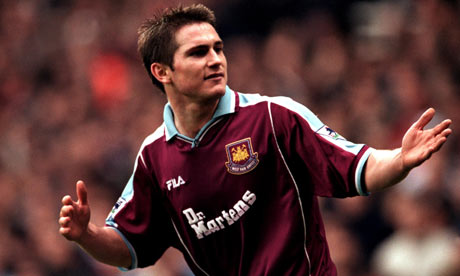 “He will go right to the very top”. These are the words of then West Ham manager Harry Redknapp in 1997 while speaking at a public fan forum.

Redknapp has since become synonymous with hyperbole, but in this instance, his words were eerily accurate.

Lampard followed in his father’s footsteps by enrolling in the West Ham academy and eventually broke into the first team in 1996. His father, Frank Lampard senior, played an enormous role in his development as an inspiration and disciplinarian.

Lampard senior played over 600 times for West Ham between the 1960’s and 80’s. Former Hammer Tony Cottee had the unique distinction of playing in the West Ham first team with both father and son and said:

“There’s no doubt that his work ethic came from his dad, the old man put the time in with him, passed on his knowledge, showed him how to make the most of himself. That’s where it came from.”

On the eve of his son’s 100th cap, the notoriously private man opened up about his role in his son’s footballing career, saying:

“I would take him to practice at a nearby park and would work, work and work again at his game. There were times when I drove him to tears, but he responded. He always wanted to improve, (to) get better.”

This unstoppable drive and hunger to improve is ultimately what has propelled Lampard’s career and kept him at the zenith of the game for so many years.

In a recent interview with Jamie Carragher for the Daily Mail, Lampard spoke about his need to outwork others, saying:

“I was never that quick as a kid, so I had to get quicker. I trained hard. I was never that player who could roll out and relax, like Michael Owen or Steven Gerrard, who were natural.

“I knew if I dropped a level, if I got sloppy in training, I would fall behind.”

In 2001, West Ham’s acrimonious sacking of Redknapp lead to Lampard trading his east end roots for a new life in Chelsea’s west end.

His new manager at Chelsea, Claudio Ranieri, saw him as an excellent prospect, but he surely had no idea just how prolific his career would be.

Lampard arrived at a Chelsea side that was aspirational, with owner Ken Bates transforming the club and attracting such names as Marcel Desailly, Emmanuel Petit and Gianfranco Zola. However, the club was unable to compete financially with the league’s heavy hitters.

When new owner Roman Abramovich purchased the club in 2004. Lampard faced his toughest test to date with more competition for a place in the Chelsea midfield.

Facing stiff competition, a then 25-year-old Frank Lampard called upon his focus and work ethic to form an integral part of the Chelsea spine that dominated England and eventually Europe.

Lampard’s rise to prominence culminated in 2005 when his performances earned him the following accolades: Football Writers’ Association Footballer of the Year, PFA Fans’ Player of the Year, England and Chelsea’s player of the year and runner-up in the Ballon d’Or behind Ronaldinho.

Lampard’s final challenge at Chelsea was undoubtedly his hardest when he suffered the tragic loss of his mother in 2007.

Still shy of 30, he showed incredible mental fortitude and courage to play in a Champion’s League Semi-Final against Liverpool just one week later, netting a decisive 98th-minute penalty.

In his time at Chelsea, Lampard became one of the game’s most decorated players. He retires as the Premier League’s fourth highest scorer amassing a staggering 177 goals from a midfield position.

Many players are lauded for their quantity of goals, but Lampard can also be praised for the fashion in which he scored. He holds the record for the most Premier League goals from outside the box (41), all of which are worthy of any highlight reel.

Towards the end of his time in England, Lampard’s body finally showed signs of breaking down with consistent thigh and calf injuries. Never one to be stopped, Lampard set himself one final challenge – to leave his mark in Major League Soccer.

While brief, his time in New York again showcased the midfielder’s class and mental resilience. Initially he was derided as ‘the worst signing in MLS history’, due to a poor start as he struggled for consistent fitness.

Lampard once more set about making a mockery of his critics, finishing his career in style with a goal ratio of one in every two games and notching New York City’s first-ever MLS hat trick in the process.

Now that his time as a player is over, it is intriguing to consider what is next for the last of England’s ‘Golden Generation’.

Recent years have seen the retirement of fellow England teammates David Beckham, Steven Gerrard, and Paul Scholes. While Gerrard has recently taken up a coaching role at Liverpool, Beckham and Scholes are pursuing business and media roles.

It is to the national side’s detriment that neither of these world-class players has progressed into a coaching capacity to work alongside current England manager, Gareth Southgate.

Lampard, like Beckham, made up for his lack of pace and trickery by mastering the fundamentals of the game and ensuring his body was always in optimum condition. These foundation skills are the basis on which great footballers are built and there is a need for them to be ingrained in England’s next generation.

While Beckham has shown little interest in management, Lampard is already undertaking his coaching qualifications, with the Football Association ready to offer him a pathway into management.

Lampard’s unique blend of physical and cerebral qualities makes him the most likely to succeed in management amongst his ‘Golden’ peers.

The Chelsea legend need not look any further for encouragement than his former teammate and friend, Jody Morris. Morris, who played alongside Lampard in the Chelsea midfield, is currently overseeing the Blues Academy that has featured in seven of the last ten youth FA Cup finals.

“For him to be example to look up to for our youngsters, someone who has been in their position.. and gone on to achieve what he’s achieved, it is going to be great for our kids at the academy”.