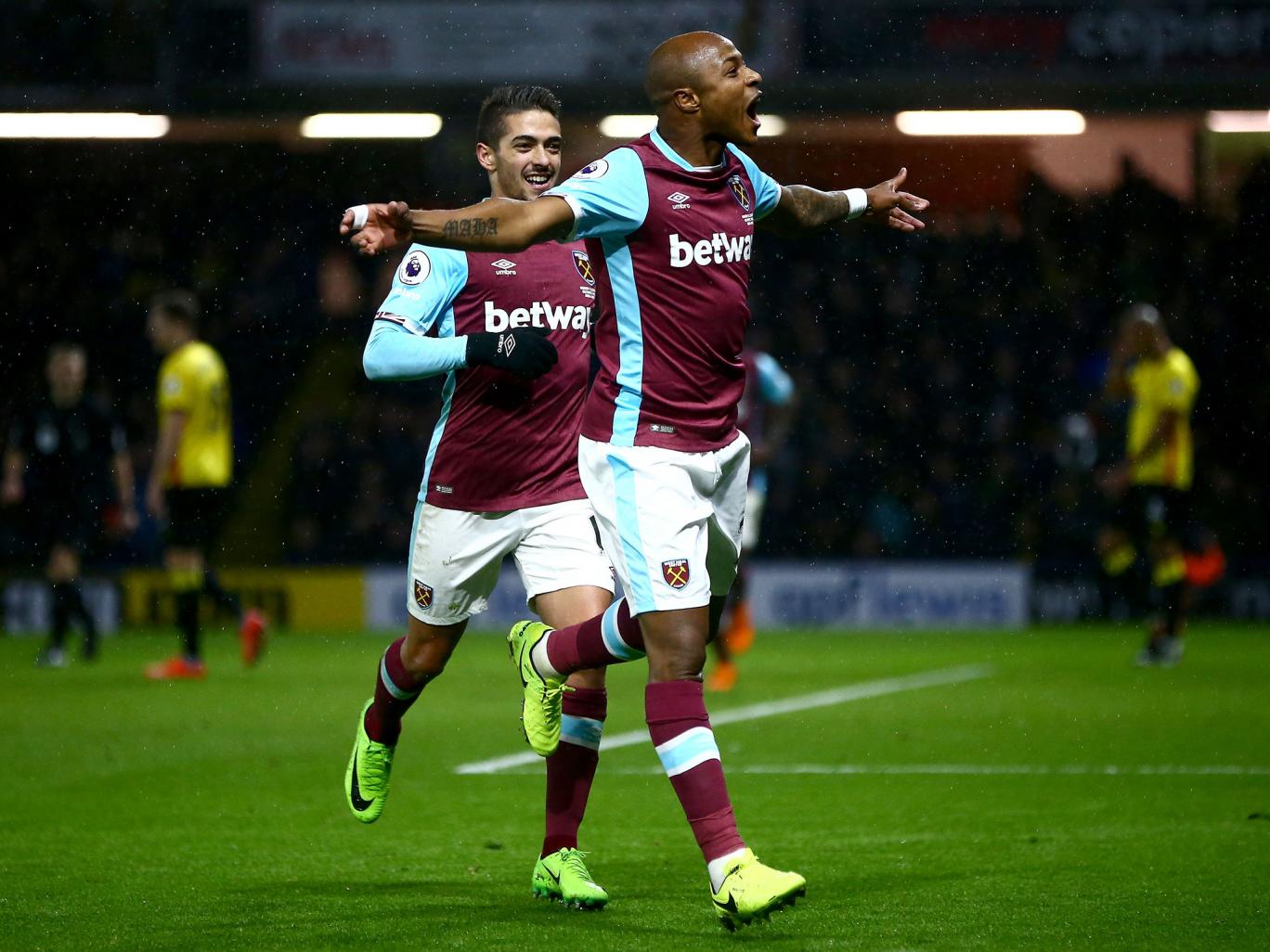 West Ham drew even today to Watford 1-1 in a late day Premier League match at Vicarage Road. Goals by Troy Deeney from the spot, and an equaliser late from Andre Ayew, in his first match back from international duty, were all the scoring action on the day that saw Slaven Bilic’s side earn a hard-fought point.

West Ham came to Watford without Andy Carroll, and the hosts were without Nordin Amrabat and Christian Kabasele due to their recent injuries. Despite the absences, Walter Mazzarri’s side had an enthusiastic crowd at their home grounds for the final league match of a successful February for the Hornets. The Hammers had hoped to avenge a September 2-4 defeat in which Watford came back from a 2-0 deficit to embarrass West Ham in their new stadium.

Early on it looked like they were in store for another embarrassment as Cheikhou Kouyaté, playing in the back, unnecessarily took down his former teammate Mauro Zarate in the penalty area to earn a penalty kick in only the third minute of play. Troy Deeney’s kick was outside the reach of the diving Darren Randolph and almost immediately the Hornet’s had a lead.

West Ham, late in the first half, had an opportunity when Watford keeper Heurelho Gomes pushed an Aaron Cresswell cross towards Robert Snodgrass. From short distance Snodgrass was unable to get the clean shot.
Late in the second half, West Ham did find their needed goal as Manuel Lanzini found Antonio ahead of the defense, and his shot hit both posts before deflecting into the path of a fortunate Andre Ayew, who sunk the ball into the net.

The enthusiasm grew as the Hammers looked to collect all three points but waned quickly when Antonio was awarded his second yellow card with only four minutes remaining. Down ten men West Ham seemed content to hang on for the draw, and other than a frightening corner kick from Watford in the closing minutes of stoppage time, the visiting club was able to hold on for a single point.

Once again, West Ham was probably lucky to secure a point without a true striker on the pitch. Andy Carroll has been absent for the last two matches, and Diafra Sakho is still a month away from contributing. All Bilic’s other options “up top” seem to be patches and not solutions. The gaffer seems to be resolved in that he can plug Michail Antonio into any spot on the pitch. As a forward Antonio showed great spirit but needed quicker pace from his supporting attackers. Bilic’s placement of Kouyate in a defending position looked especially awkward in the opening moments. Zarate all but baited Kouyate into the challenge that resulted in the early penalty kick. Other than that mistake, the club did keep the hosts out of the goal for the remainder of the match.

West Ham has a few days to regroup until their March 6 visit by league-leading Chelsea. With Carroll expected to return, this will be the ultimate test of both the club and the supporters as they try to make London Stadium as unfriendly a ground as possible for the London Derby.
Wishes for a new striker and right back won’t be granted until at least this summer. Until then, Bilic will have to make do with his, now healthy, squad.