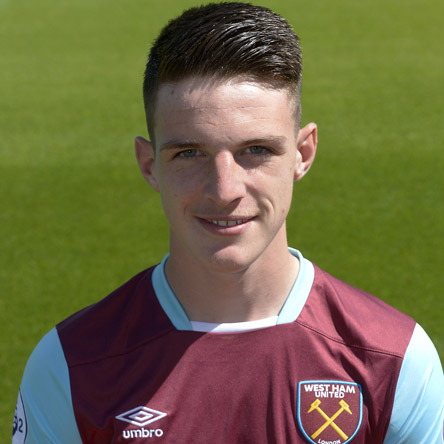 We were delighted to be able to interview academy player Declan Rice who has recently signed a new deal at the club.  He is tipped for big things in the future and we asked him a few questions to find out more about the player.

What position do you play and have you always played there?

I used to play as a holding midfielder in my Chelsea days, but when I came to West Ham I changed position and turned into a centre back.

What type of player are you?

I see myself as a ball playing centre back that can play with both feet. I love defending and being a leader on and off the pitch.

How did you get spotted by West Ham?

I was released from Chelsea at 14, luckily I had a few teams interested but I chose West Ham as it was a massive club! They made me feel very special and I could really see myself progressing at West Ham.

Have any of your family been involved in professional football?

My brother played for Chelsea for 5 years when he was younger but an injury forced him to unfortunately finish his career early and my dad played semi-professional for a few sides: Hampton & Richmond and Molesey.

Which players do you look up to at West Ham?

I get on really well with Mark Noble and Andy Carroll so I look up to both of them. But also Winston Reid, I think he is a fantastic player and defender, when you train with them you look at what they do and see if you could add that into your own game.

Who has influenced you the most during your career?

Definitely my Mum & Dad, they have been the most influential to me so far during my football career, giving me advice, driving me to be the best. I wouldn’t be anywhere if it wasn’t for them.

What are your future ambitions for this coming season and beyond?

My future ambitions are to be on the bench one more time this season and be training with them regularly. For next season be a part of the first team squad. If not to get myself on loan and get football league experience.

You’ve already represented Ireland at Under 21 level? What is that experience like? How do you qualify to play for the Irish national team?

The experience playing for Ireland u21’s was incredible, really didn’t expect to get the call up but it was a dream come true to play for them. My Nan and Grandad are Irish, so that is how I qualify to play for them.

Can you describe the feeling you got when being made captain of the Under 23’s at such a young age?

When Terry sat me down and told me he wanted me to be captain for the season I was stunned but I was ready to take on the roles and responsibilities, he sees the leadership skills in me to take the team forward.

How has the season gone for the Under 23s’?

We’ve had a mixed season, we have been dominating every game and passing it very good, but letting in some sloppy goals and also not scoring enough but that will come. We are now 3 games away from the end of the season and we want to finish in the play-off places.

How do you feel about the move to the Olympic Stadium?

I think it’s a fantastic move for the club going forward. For people like me I am motivating myself each day so that I can walk out of the tunnel in front of 60,000! The atmosphere is incredible!

How do you think the first team have done this season?

Again they’ve had a mixed season, but now there hitting really good form and looking dangerous! They work so hard in training and I’m really happy that it’s now starting to pay off on the pitch.

Do you have any interests outside of football?

Outside of football I like to: switch off, be with my family and my girlfriend. I also like playing PS4 and seeing some of my old school friends.