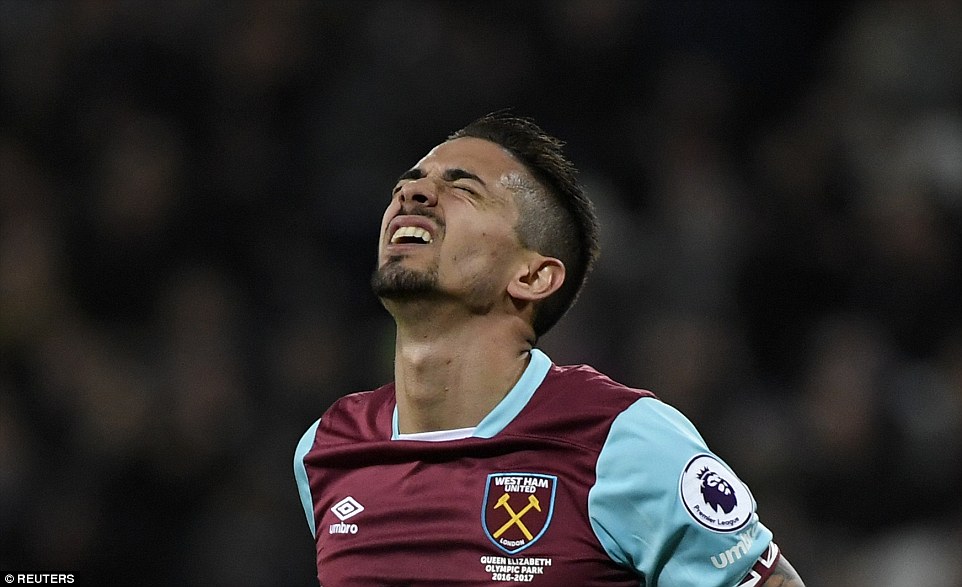 West Ham fell tonight to Chelsea 1-2 in a Monday evening Premier League match at the London Stadium.  Goals by Eden Hazard and Diego Costa were the difference against a stoppage time goal by Manual Lanzini.  Slaven Bilic found himself without his most reliable attacking asset in Michael Antonio, who is serving a suspension for picking up a second yellow card last week at Vicarage Road.  That absence was lessened by the return of Andy Carroll, who was recovering from a mild groin injury over the past two weeks.

Facing the league leaders, the hosts came out with aggressive play.  Unfortunately that aggressiveness led to a quick counterattack goal as a Manuel Lanzini free kick bounced off the wall and allowed Eden Hazard to find his way around Darren Randolph for the opening goal.

While West Ham showed good spirit, they retired to the dressing room without a shot on target.  Both Andy Carroll and Aaron Cresswell picked up injuries in the opening half, but both returned to action. The half ended with even 50% possession from both clubs.

For the second half both teams left their lineups unchanged.  Unfortunately for the Hammers the deficit would grow.  Only five minutes into the second half, Diego Costa kneed the ball into goal from short-distance off of a Fabragas corner kick.

Trying to find a successful formula Bilic brought on Byram, Fernandes, and Ayew, but to no avail.  West Ham really had a difficult time generating much of an attack.  Andy Carroll wasn’t able to make much of the crosses that were sent his way.

The London Stadium fans that remained during the added time did see Manual Lanzini break through and get a late goal, but with only a minute remaining, the Hammers were unable to find the equaliser and fell to the Premier League leaders 1-2 .

Possibly a great effort by Antonio, along with a fully fit Andy Carroll could have changed the outcome.  West Ham did show heart and spirit, but were unable to overcome a much better club.  This season is especially frustrating for West Ham fans, as their club has shown little ability to compete with the top six clubs in the league.   It has been reported here, that adding a natural striker and a lock-down right back would change West Ham’s fortunes.  Unfortunately for those in East London, they will have to wait until the summer transfer window find answers.