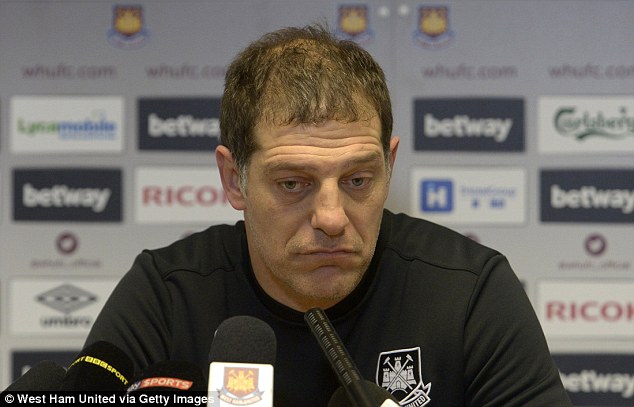 There’s no doubt that as a person Slaven Bilic appears to be a really nice chap, he’s an educated man that shows warmth and humility and in just about every interview comes across as one of life’s good guys. Add to this the fact that he had one whole playing season with us, where he was quickly adored by the faithful for his committed playing style, and it’s easy to see why he retains the unwavering support of the majority of West Ham fans, but does that necessarily mean a good man is a good manager?….lets take off the claret and blue tinted specs for a minute and take a look.

A manager needs a number of things in his armoury, clearly tactical awareness is paramount but communication skills, people skills, decision making and trust all form part of good leadership, and in essence good managers not only display all of these elements but they use them all in conjunction, take one element out and the strength of the individual is lessened.

Taking those individual elements in order let’s start by looking at his tactical awareness, the man knows his onions, listening to him as a pundit last year it’s clear he knows what it takes to win matches, be that nullifying opposition threats, setting up a team to attack or counter attack and making those fine ‘in game’ adjustments to win or at least not lose matches. He’s done it with reasonable success as the Croatia national team manager and to some degree with Besiktas, his spell in Russia was a bit of a disaster but that aside from a purely technical perspective he has a tick in the box.

So to communication skills, not just language but body language, he’s a highly intelligent man and his command of the English language poses no problems, he clearly works on tactics and strategy during the week and again I’ve no doubt there are no issues getting his methods and work ethic across. Similarly on the touch line he’s involved barking out instructions and gesturing those little ‘in game’ tweaks that are required, so again I think it’s fair to say outward communication isn’t a major issue. However communication is a 2-way thing and I do wonder how much, if at all, he listens to those around him, surely his coaching staff are flagging issues which clearly means his blinkered Alladyce like pigheadedness dictates that he won’t listen to them, or more worryingly is there a detachment between him and his staff?

Now let’s look at people skills and this is where I perceive there’s a gaping whole in his armoury, having good people skills as a manager isn’t just about being fair or understanding, there are times when difficult decisions need to be made and ultimately upsetting individuals comes with the territory. Being loyal is great but good managers have the ability to detach themselves, take a step back and take stock of the situation, and to be honest Slaven can’t or more likely won’t do this. Yes he handled the Payet situation well once things had come to a head but this had clearly festered for nearly half of the season. I think Slaven as a Manager likes to be liked and it’s clear he shows unwavering faith in those players closest to him, what he doesn’t have is that hard streak which allows him to make those unpleasant decisions. If he was at Man Utd he’d find a spot for Rooney, if he was at Man City and Aguerro would have been found a spot even with Jesus in the side, if he was at Liverpool Sturridge would probably be in goal, but that’s the difference Mourinho, Guardiola, Conte and Klopp will bench players for the betterment of the side. Bilic trusts Noble despite the fact we’ve got stronger options available, Obiang is our Kante and Kouyate has the ability to be another Viera, what he’ll never be is a right back, but because those Bilic adores his core men those difficult decisions will always be averted.

I like and respect Slaven as a man but personally I think his people skills are his Achilles heel, he needs to be more detached and see what tens of thousands of fans have seen since the start of the season.
Now let’s quickly look at decision making, this obviously follows on from people skills as its so closely linked, again this shows major short comings, some of his starting formations are baffling to say the least, Lanzini a man who can be a modern day Berkovic is deployed wide left when he’s clearly more dangerous in the centre, Snodgrass brought in but used in a variety of positions and then there’s Antonio. Slaven also has this ability to make changes at the end of games which invite pressure on us, surely it’s no coincidence that we top the charts when it comes to giving points away at the death of matches, the Tottscum one in particular still pains me! I’d hate to think how many points we’ve dropped through poor management decisions this season.

Finally trust, again sadly a deficiency from my perspective. How long did it take Antonio to break into the team last year, and low and behold once he was given the chance he turned out to be rather good! We’ve the best crop of youngsters coming through for ages but I just can’t see them getting a chance with Slav at the helm, Martinez was scoring for fun in PL2 but didn’t get a sniff, we’ve got several out on loan but will they get a chance when they return?…I personally doubt it. Sadly Mr Bilic has serious trust issues, ok so he sees Byram in training but give the lad some proper game time to really appraise him. Look at Koeman at Everton and before at Southampton, he’s not afraid to blood youngsters and watch them flourish. An 18 year old scored a champions league goal for Dortmund this week, would he have got that chance if Slav were their manager I somehow doubt it.

So to summarise, yes our Slav is a genuinely nice fella, he’s tactically astute, he’s sadly detrimentally loyal and clearly falls short when those difficult decisions need to be made, which is why he’ll never manage a top 5 club. For us to push on its my belief that the board need to make one of those decisions that sadly Slaven cannot make, either that or settle for being a mid table side like Stoke, I for one want us to push on not slip back and as much as I like Slaven the man, sadly I’ve lost faith in Slaven the Manager. COYI