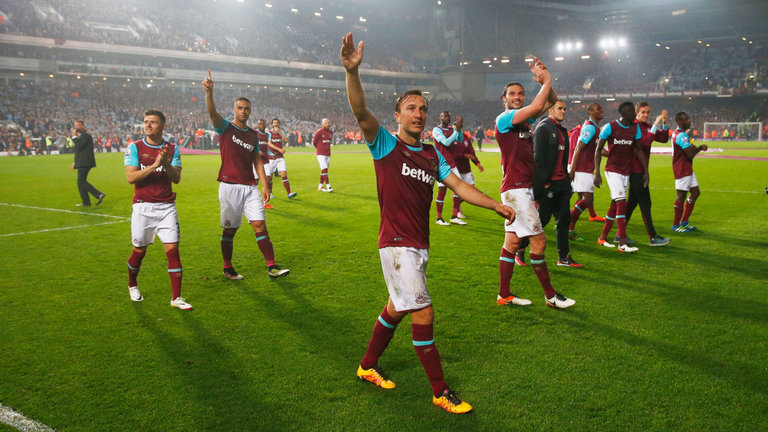 Now on to the important stuff. After the poor result and performance in our previous match away to Bournemouth where we lost 3-2,which is a score line that I think flattered us by the way there has been more questions asked about our captain Mark Noble and his role in our team.

In terms of effort, commitment and passion I cant say a bad word about him. He gives 100% every time he plays for West Ham and you can see how much it means to him. Last season I thought he had a very good season and that was his best in a claret and blue shirt by a long way. I know some fans adore Mark Noble I’m not one of them I never have been but I don’t knock the opinion of fans who love him we all agree and disagree on players but lately more and more supporters have brought into question as to whether Mark Noble should be starting every game for us and how he is a shadow of the player from last season which lets be honest has been the case for quite a few players this season including Adrian, James Collins and especially Aaron Cresswell.

Slaven Bilic made a comment saying how important Noble was in the dressing room and on the pitch which I understand as captain he is a big link between the manager and players but this does not mean he should be an automatic starter which Bilic hinted at, regardless of his form. We have been in this situation before with Sam and Kevin Nolan. At the moment we are playing Cheik Kouyate at right back every week who offers absolutely nothing in that position to accommodate Noble in the middle of the park and this is my issue. I think Noble struggles more at home especially on a bigger pitch as he has even admitted himself his legs are starting to go due to all the football he has played over the years. He has also  been often criticised by supporters for holding on to the ball for to long and maybe not going forward as much as he should when in possession.

Antonio Conte came in at Chelsea and he could see that John Terry was not up to the level required to help benefit the team week in week out and made the decision to drop Chelsea’s Captain and one of their best ever players for the greater good of the team. Now I’m not saying this will make us start challenging but I’d like to see Slaven take a similar approach in regards to Noble, not get rid of Noble completely as I still think he should stay at West Ham as he has a lot to offer the club. He could still be club captain and share responsibilities with Winston Reid  who is vice captain in a similar way he did with Kevin Nolan. Noble would have a big influence in the dressing room still with the new players and would certainly help with the younger players coming through but maybe Slaven should pick and choose what games he plays in and doesn’t play in a bit more.

I think we should really start looking to the likes of Edmilson Fernandes and Josh Cullen (when he returns from Bradford) to start challenging for a starting spot in the team alongside Cheik Kouyate and Pedro Obiang with Noble taking a step back and being picked for games that suit him more and coming off the bench in other games if necessary. Even though I have never been Mark Noble’s biggest fan I wouldn’t like to see the fans turn on him the way some did with Nolan when it was a similar situation. I still do think he has a lot to offer us I want to reiterate that and as I said in terms of commitment and heart he shows for the club ill always respect Mark Noble but I think its time for him to take more of a back seat in terms of playing every game.