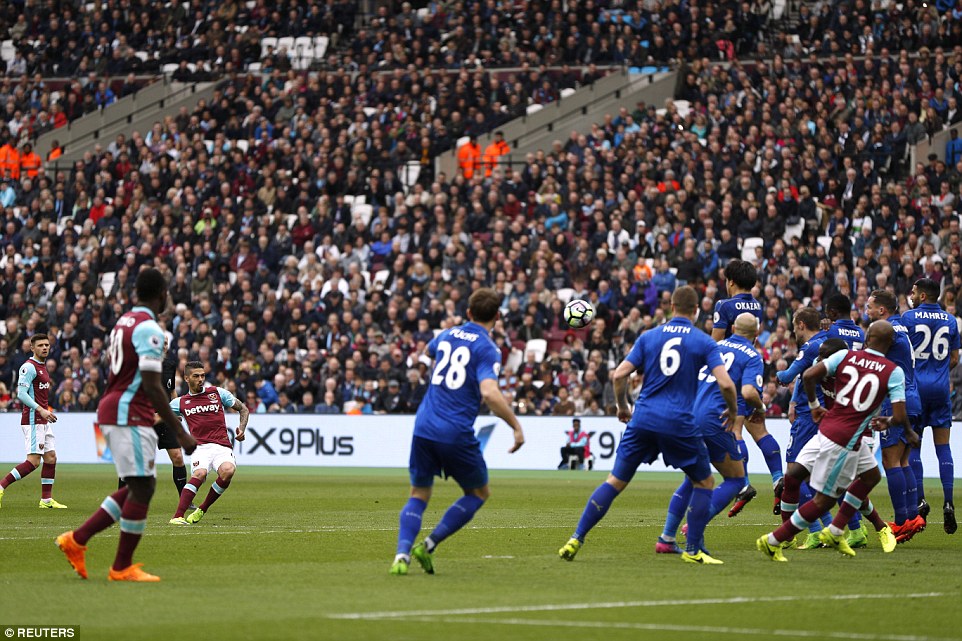 Leicester City continued it’s mastery over the Slaven Bilic helmed West Ham United first team with a 2-3 victory over the Hammers in the London Stadium.  For the defending league champions, it was their first away victory in the Premier League this season.  For West Ham, it was another unexplained defeat, as they continue to look for answers in the back four.  With the victory the Foxes conclude a remarkable week as they clinched their second leg victory in the round of 16 over Sevilla.

For any West Ham supporters hoping that Leicester would have a slow start due to their European heroics early in the week, they were disappointed.  Barely five minutes in and Jamie Vardy took the ball from Pedro Obiang and served up Riyad Mahrez, who found the far corner away from Darren Randolph.  Not two minutes later and Mahrez was at it again.   He received a free kick and crossed to an open Robert Huth, who made it 0-2 before many patrons were in their seats.

The attitude around the ground sunk even further when today’s captain, Winston Reid, went down with injury forcing Bilic to use a substitution only 18 minutes in.  He brought on Robert Snodgrass, hoping to spur more opportunities.

West Ham’s first great opportunity took place only two minutes later when Manuel Lanzini’s free kick from 25 yards out found the top-left corner of the goal.  With the hosts finally getting on the score sheet, the atmosphere at the London Stadium improved.  Both sides had their first half opportunities but it was Leicester who had the better first half finish as Jamie Vardy scored from three yards out on a corner that West Ham was unable to clear.  Vardy’s strike from short range was in heavy traffic but Randolph had little chance to block.

Both goalkeepers had to employ some heroics to finish the half, but both teams retired from the pitch with a 1-3 score sheet.  Neither side made changes during the break and the second half featured a desperate West Ham trying to draw even.

Early in the half, a West Ham corner was headed by Andy Carroll to Andre Ayew, whose own header found its way in.  With a 2-3 score, the London Stadium came to life, as did the home side.  The remaining 30 minutes predominately featured West Ham taking their shots, but Leicester’s Casper Schmeichel showed why his is one of the best goal keepers in the world with his saves and leadership during the close of the match.

A 77th minute cross from Ayew to Andy Carroll was saved by the Danish goal keeper.  Goal Line technology confirmed it was close, but not a goal.  Two minutes later Ayew had an opportunity from ten yards out but his shot was entirely too high.  Moments later a Snodgrass corner found its way to Andy Carroll, whose immediate shot was saved by Schmeichel.   Even during the six minutes of added time, Carroll had an open shot which Schmeichel batted away.

For all the efforts and almost twice the attempts as Leicester, West Ham as unable to equalise and walked off the pitch winless since early February.  Hopefully a visit to Hull can give the Hammers a sorely needed three points, but without some smart moves during the transfer window, it seems it will be a forgettable finish to the season for the Claret fans.