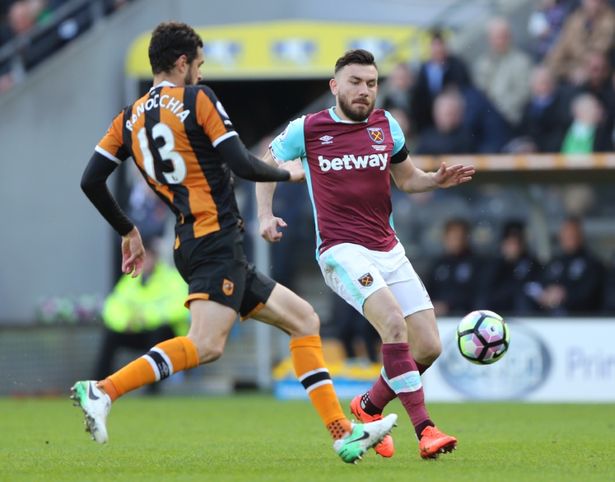 1) Players playing scared
The fact that we scored first still does little to hide how scared we are playing. Going one up did not calm the nerves of the players. There was some sloppy goalkeeping by Randolph in the first half that nearly gifted Hull an easy goal. We still do not defend with any authority and that defending needs to start at the front line and work back by harassing the other team and making life difficult for them.

Carroll has been excellent helping out, but he is the one shining example of doing all he can to aid the cause. It would be easy to say we missed Obiang in the middle but I was very disappointed with Kouyate. Finally playing in his preferred position, I wanted to see him boss the game, something he did not.

Our play reminds me of the games we played before going to Palace and nicking a win. In that Palace game, while we rode our luck, we played as a team and looked fairly solid. Somehow Bilic needs to get that mentality back into this team.

During the offseason Bilic needs to swallow his pride, assuming he is still our Manager (See point later on), and hire the best man to do that defensive coaching job. Both seasons under Bilic we have never been great at defending the only difference is last year we could score goals with ease, that is not the case this year.

2) Run, Run and Support the Man
Watching our build up play reminds me of my days playing Subutteo when there was only one or two figures or players doing anything at one time. Too many times Lanzini was picking the ball up deep and given limited options to continue to move forward and was left with trying to do it all.

The full backs were poor moving forward up the wings supporting or offering options and Ayew and Snodgrass don’t look on the same page as everyone else. More movement is needed to open up teams, stretch them and allow our skill players to get more involved and do what they are good at

3) Plan A, B, C and D
Who fears out strike force? When teams neutralised Carroll, we have nothing to plan out attack around. So let’s change the formation, maybe play two up front?

Remember the day Allardyce played a false nine and we ended up beating Spurs, or go back just over a year when Bilic played Oxford in front of the back four and Ozil was negated.

My point is that we need to think outside of the box, switch our game plans up, to come away with wins or stem this barrage of defeats.

4) Let the battle begin
Make no mistakes we are in a relegation battle. Listening to Ex the other day on the radio he mentioned that one team makes a dramatic drop and gets sucked into the battle, this year that is going to be us. Palace will overtake us when they win their game in hand, Burnley is more resolute and stout, and that leaves Sunderland, Middlesborough, Hull, Swansea, and us contesting those three spots. Sunderland and Middlesborough are gone. Are we saying that we are too good to go down – We just lost to Hull 2-1.

I love Bilic, but no man is bigger than what we need to achieve safety, harmony and improvement. I’m not sure sacking him now would change much with regards to the results, what I will say I that eight games into next season if we are still in this same position then he goes.

Don’t wait until January saying he needs time; he’s had the whole of this year. Allow that new manager to evaluate the players and figure our the game plan for January. To be clear, I love Bilic, and I am not convinced there are that many great options out there.