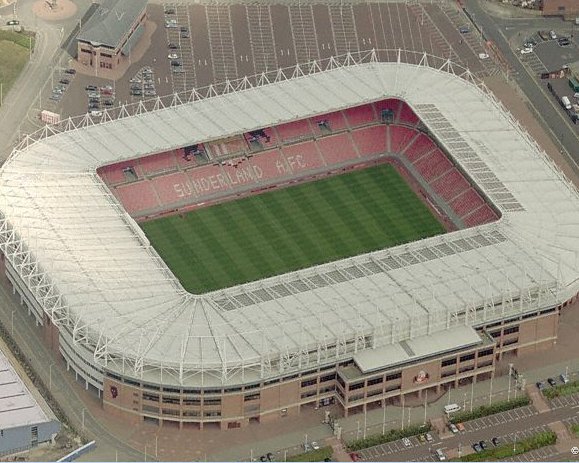 A sigh of relief after the Swansea win could become even bigger if we beat Sunderland. A win could mean virtual safety for The Hammers and perhaps some thought could go into playing in the Premier League next season. Sunderland have been flirting with relegation for a few years now (I mainly blame the inconsistencies with managers) and this year look like they may not beat the drop.

Stadium: The Stadium of Light

Sunderland moved into the Stadium of Light in 1997 (can you believe that was 20 years ago?) after leaving their old home Roker Park. The stadium is totally enclosed and, as you can tell by the capacity, is quite large. Behind the West Stand is a large red wheel which is an emblem of the lifts that used to take the miners down to the mines, which the Stadium of Light was built on (look up Monkwearmouth Colliery), and also features at the top of Sunderland’s badge.

Train
The closest station is Sunderland Railway Station which is located in the city centre and is an approximate 15-25 minute walk to the stadium.

Car
If you have a sat nav, put SR5 1SU in it and this will take you straight to the stadium. For those who don’t have a sat nav exit the A1 at junction 62 and take the A690 towards Sunderland. After approximately 8 miles, you will come to a roundabout. At the roundabout, turn left onto the A19 which will have a sign for Tyne Tunnel. Stay on the left lane and take the second slip road towards Sunderland (and this will have a signpost for the Stadium Of Light, A1231). Go straight over 4 roundabouts into Sunderland. There will be two sets of traffic lights (make sure you stay in the left lane for the 2nd set) to go towards Roker rather than Sunderland. From here you will see the stadium car park on the right, but there is limited parking so I advise against this.

Parking
The stadium car park is limited, so you may not be able to park there and as expected for a Premier League stadium there are residents only parking restrictions around the ground. Make sure you double check where you are parked to avoid fines, and always park legally.

You can park at the Stadium of Light metro station for £4 or you can park in the city centre and walk to the ground (again around a 15-25 minute walk). The traffic can pick up on match days so please give yourself plenty of time.

There is a Park & Ride operation on matchdays, free for both home and away supporters. This is at Sunderland Enterprise Park, which is well signposted off the A1231. They run every 5 minutes for an hour and a half before kick-off and continue running after the game until everybody has left.

Drink:
Sunderland have opened a Fan Zone which is outside the South East part of the stadium. It has live bands, large screens for sports and food and drink outlets for both home and away supporters. Entry is free and it opens three hours before kick-off and remains open for an hour after the game.

There are two social clubs – The Sunderland Companions club and the New Democratic Club – both situated on North Bridge Street which are about a 5 minute walk away from the ground. They do get busy, but they both welcome away supporters.

Another pub that allows away fans is The Albion Pub on Victor Street (off Roker Avenue) which is a five minute walk from the station with limited parking nearby. Free snacks are put out after the game and there’s also a chip shop on the same road.

If you are up for a bit of a longer walk (around 15-25 minutes) then the Harbour view pub on the sea front may appeal to you. Go along Roker Avenue (opposite the main entrance to the stadium) until you reach the sea front. Turn left along the seafront and you will see the pub on the left. It’s listed in the CAMRA Good Beer Guide, serves good beer, has reasonably priced food (with it’s own matchday menu) and has a large TV. You can get some good views of the coast and harbour – hence the name.

I hope this guide has helped some of you find your way around Sunderland, enjoy the match and let’s hope there are many happy hammers after the game. As always, stay safe. Come On You Irons! – @CraigPodevin