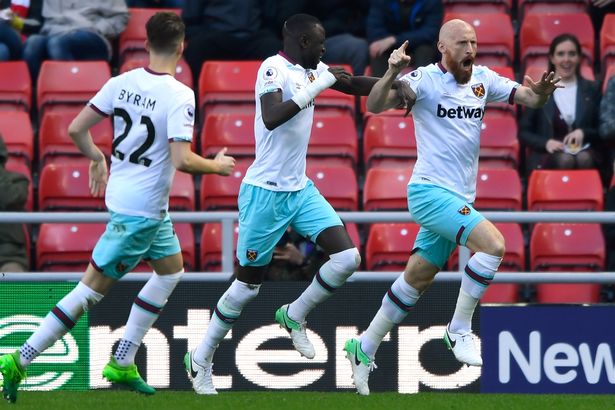 ExWHUEmployee
Written by Steve Claydon @trbeat
Liability. Week in, Week out.
When Adrian went walkabout against Southampton and cost us the game, it was time to replace him.  If Bilic does not pull the trigger on Randolph, then it’s going to be a long last five games.  Clean sheets require a mix of a good back line and a solid keeper, or a solid back line and a good keeper.
Each and every week we can’t seem to string those two requirements together, and before you say we kept a clean sheet against Swansea, Randolph did his best to try and ruin that.  I’m done with Randolph.  Nothing personal but I’ve given him the benefit of the doubt for too long. This project is over.  #BringBackAdrian
Play to a Strength.
So, now I am confused and granted that does not take too much.  We have the big man playing upfront, so we go and play it on the floor, which is fine if we are moving the ball forward.  There were periods of this game where we played some pretty football; however, it was in our third of the field, and we were not moving forward.
A lot of times during this passing play, Sunderland pressured us into making mistakes.  I’m not asking us to lump it forward, pray and hope, but we have a couple of fairly pacy backs and half decent wide midfielders that should be looking to attack the wings and look for options.  Our first goal demonstrated that we could do it and that that tactic would work.
We looked most dangerous when we played wide, stretched the field and looked for options, but those times were limited.  We played today as if we had Defoe on our side, looking and hoping that someone would make an intelligent run to open space.  Sunderland played to that strength, pulling defenders and looking for incisive balls, and if not for some poor finishing and some excellent defending by Fonte this would have been another game we lost.  Tactically we look confused at times and not sure what we are doing.
Couldn’t even close out during a fire sale.
Twenty-two points dropped from winning positions.  I would guess twenty-two points lost in the last 5 minutes.  Tottenham, West Brom, Bournemouth and more left me feeling gutted.  If I have no confidence that we will close out a game thousands of miles away, on my comfy couch, what hope do I have that the players will feel they can.
There is no strong mentality in this team.  Leading by a goal means one thing, backs to the walls and complete fear.  If I were the opposing manager, one goal down against us with five minutes in the game to go here is what I would tell my team. We have this; they are there for the taking. The sit back and try to suck up the pressure method does not work.
To end the game correctly requires communication between everyone and a couple of players willing to show skill, determination and dedication to take the game by the scruff of the neck and boss the last few minutes.  This rolling over needs to stop and STOP right now.
How to piss your boss off.
Bilic: I’m not sure I have full faith in you.
Byram: You can trust me.
Bilic: Sure?
Byram: Of course boss.
Bilic: Ok, well don’t screw up then.
Byram: Will two yellows count as screwing up?
Bilic: MotherF%*ker
Silly boy.  I get it; it can happen to anyone.  I get that you can get two yellow cards in the heat of a game.  I get it.  I get it.  I get it.  But when you are incredibly thin at a position, and you already have some challenges with people suspended and injured, you have to think bigger picture. It was his take charge of, to own that role, to step up and honestly say, I am the man for this job.
This fight for survival is not over yet, and all Byram accomplished was make it that much harder for us next week.  Everton is going to have a field day running that channel with whoever puts their hand up and says “I’ll do it, boss”.
I’m disappointed in Byram because I thought that he had turned the corner the last couple of weeks. I think he still has a lot to learn with regards to discipline. Learning in the EPL when you are thin at a position is not ideal.
What is our first eleven next year?
As I mentioned, during the offseason I plan to write a team breakdown of each positional area and outside of few players; Lanzini….umm Lanzini, oh and Lanzini (Yup, I have a man crush on Lanzini) I’m not sure who should be back.
Ok, that is a bold statement. This year has been terrible with injuries, stadium move, the Payet issue and more but we can’t and won’t survive another year of these challenges.  We need to infuse the squad with reliable, skilful and dedicated players.  We have players who individually meet these criteria but who meets them all? Again, maybe a bold statement but our summer and winter signings have been wide of the mark, and we need a team with quality starters and quality depth.
We, as fans, have moaned at nearly everyone during the year and I know that that is part and parcel of the game, but a question for you, who do you see as a must have player to be brought back?  I already picked Lanzini, so he’s off the table.
See you next week.
Match Talking Points
share