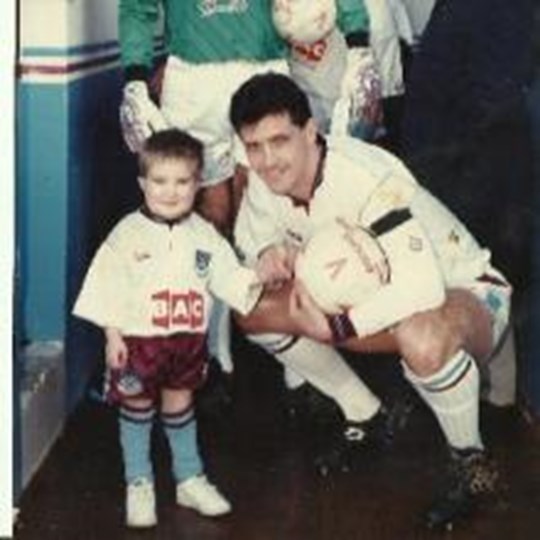 My brother Robbi “Bish” Reardon was diagnosed with a brain tumour that massively affected my family.  My father applied for Robbie to be the match-day mascot for the West Ham vs Aldershot in the third round FA Cup in 1991.  West Ham accepted the application.  It is to my knowledge that on the day West Ham took my brother as if he was one of their own, he even had Martin Allen take his autograph album in the dressing room and had everyone sign it!

The players and the manager at the time, Billy Bonds, took to my brother and gave him what was possibly the best day of his life.  My brother was the first non-player to appear on the cover of a matchday programme, followed by none other than the queen herself.

My brother was invited to attend the cup replay against Aldershot that year, and was treated like a king by the club, watching the game from the Directors box.  Then at half time, my family was taken down to the centre circle to be presented with gifts from west ham, including a picture frame that contains the signatures from both sides that played that day.

My brother passed a few months later that year on the 25th March 1991, Tony Gale and Ian Bishop attended the funeral and Tony said that Billy (Bonds) would have sent the whole team but they were up north for the Oldham game, he was seven.  It was 2 years and 6 months to the day I was born, I never got to meet him.

I recently got in touch with Ian Bishop, who was my brothers idol and he has told me he will do whatever he can to help me with my fundraiser.  This shows how much my brother meant to him, seeing as 26 years later he still remembers Robbi.

I am fundraising for Cancer research into brain tumours, with a portion of my donations going to the Bobby Moore Fund.  My fundraiser will take me 40 miles over the course of 16 hours and sees me walk from Vicarage Road stadium, to every London Premier League Stadium and finishes up at our new home, the London Stadium.

If you would like to donate, please go to http://justgiving.com/walk4robbi