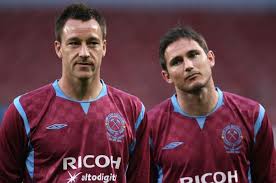 It’s time to bring the boy from Barking, who started his career at the club home. I accept that many of you will disagree with this post, but I think at this stage of his career, West Ham could do with John Terry. John Terry could do with West Ham. Providing we could get him on reasonable wages and a year’s contract, with an option of another year should both parties want it? It’s a no brainer. He could have a similar impact at the club as Teddy Sheringham had when he arrived, in the twilight of his great career. The mere presence of Sheringham on the training ground lifted the whole squad

Yes, John Terry has had his fair share of controversies on and off the field over the years. But he is a winner, has seen it all and done it all. I once read an article on one of the greatest managers of all time. Brian Clough, Clough had an extremely difficult choice to make before Nottingham Forest’s vital European Cup semi –final. Clough explains that he had two outstanding centre half’s in Larry Lloyd and David Needham and could not choose between them.

As people they were totally different, Needham “Was a lovely lad, someone you would proud to have as a son in law. While Lloyd was late for training and an arrogant loud mouth “recalled Clough. Clough is in the hotel lobby still unable to decide who to pick. So he asks both players the same question: “If I walked into a pub what would you do”? Needham replied: “I would have bought you a pint Mr Clough “was Needham’s reply. Lloyd sneered and replied: “I would buy you a pint, pour it over your head and walk out! “I thought YOU BASTARD! But I had my answer, I needed a bastard in my defence” said Brian Clough.

How West Ham could have done with a bastard like John Terry, especially from the 80th minute onwards when game after game our defence resembled the keystone cops! An absolute shambles! Someone to cajole and organise things at the back! Many have rightly said both Randolph and Adrian are weak at crosses. A good defence cuts out crosses, John Terry’s experience would have been invaluable in that regard.

It is not just on the pitch that Terry would prove his worth. He would be of enormous help to both Reece Oxford and Reece Burke .We need both in the team and on the bench! I can’t see the point of sending our player’s out on loan after loan. Sometimes a player just lands up getting frustrated for whatever reason. I’m not sure what Reece Oxford’s loan has done for him confidence wise.  Or the talented Martin Samuelsen being sent back by Peterborough and the manager publically saying; “He lost confidence “Talk about trying to destroy a lad or what? Let’s get John George Terry in to provide leadership on and off the pitch! We are more than a football Club, we’re a way of life!