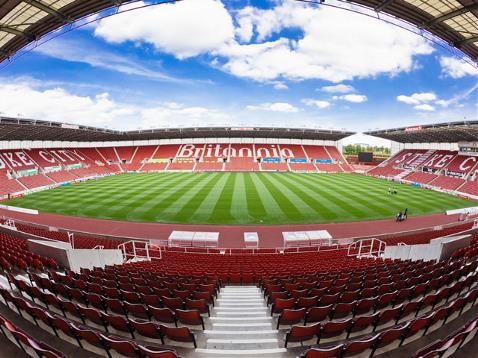 In my opinion, the home draw against Everton was the best defensive performance of the season. Managing to prevent a free-scoring team from having a single shot on target is incredible for a team in our position and seeing Nordtveit, Masuaku and Collins play the way they did was amazing.

Like our last away opponents Sunderland, Stoke moved into the then-called Britannia Stadium in 1997 after playing at Victoria Ground for 119 years. The players come out from a corner of the ground between the South and West stand, and the stadium features a large video screen on the South stand. Behind the Boothen End there are three statues of their former player Sir Stanley Matthews. There’s also a statue of World Cup winner Gordon Banks on the main approach to the stadium.

The stadium is quite exposed and the corners being open mean that some cold winds can come through the stadium, so make sure you stay warm throughout the game.

The closest train station to the stadium is Stoke Railway station, however this is located 2 miles away. There is a shuttle bus stop that you can catch from nearby Glebe Street (5 minute walk) and the shuttle busses run a return service after the game.  To catch this bus, you can turn right from the station and go down Station Road. At the bottom of the road by the traffic lights, turn right to go along Leek Road (A52) and go straight across the A500 into Glebe Street which is straight in front of you. You will be able to see the line of busses from there.

If you walk this route, the walk to the stadium should be approximately half an hour: turn right from the station down Station Road. At the lights turn right along Leek Road (A52) under the railway line and then left down the tow path of the Trent and Mersey canal. Follow it all the way until you are level with the stadium, where there will be 2 footbridges that will take you over the canal and railway line into the ground near the South Stand away end.

Shuttle busses run throughout Stoke every 15 minutes from various stops until kick-off, they are mentioned throughout the article where you can get them from/to.

You can leave the M6 at junction 15 and go straight across the roundabout onto the A500 towards Stoke. Continue along the A500 until you get to the slip road for the A50 towards Derby, at the top of this slip road turn right at the roundabout (still marked A50) and then the Bet365 Stadium will be signposted. You will be able to see the stadium on your right from here. Please note that some signs will still say the Britannia Stadium.

Car parking at the stadium costs £5, however I’d advise against it. There is a nearby Harvester that is available to park in for £3, however try to get there early as you can’t be sure how busy it will get. Also, as mentioned later in the article, there is a Power League complex at Dennis Viollett Road which allows away supporters and parking there costs £4.50.

There is a Screwfix on Stanley Matthews Way, approximately a mile from the stadium, which charges £4 and allows quicker access to the M6 after the game. Alternatively, you can park in Stoke City centre and take the Bet365 shuttle bus which runs on match days. This shuttle bus also stops at a pub mentioned in the next ‘food and drink’ section.

Next to the stadium is a Holiday Inn or a Harvester restaurant/pub which both allow away supporters. You can park at the Harvester (as previously mentioned) for £3 for the day. Although a little further from the stadium, there is a Power League complex which has a Sky Sports bar which also allows away supporters on Dennis Viollett Road (which is off Sir Stanley Matthews Way). Car parking is also available here for £4.50.

Further down Stanley Matthews Way is the Longton Rugby Club which has two bars showing Sky Sports and parking is also available here for £5 a car. This is a 20 minute walk from the stadium.

If arriving by train, the Terrace Bar on Leek Road is an official away fans pub. It’s only 5 minutes’ walk from the railway station. You can turn right out of the station entrance, left at the crossroads and the pub is on the left. This pub shows Sky Sports and food for those that are hungry. There’s a shuttle bus to the ground which costs £3 that goes to the pub and stadium and carries on running after the game.

As always, enjoy the game and stay safe while supporting the boys. Let’s all hope for 3 points to further help us stay in the Premier League this year.