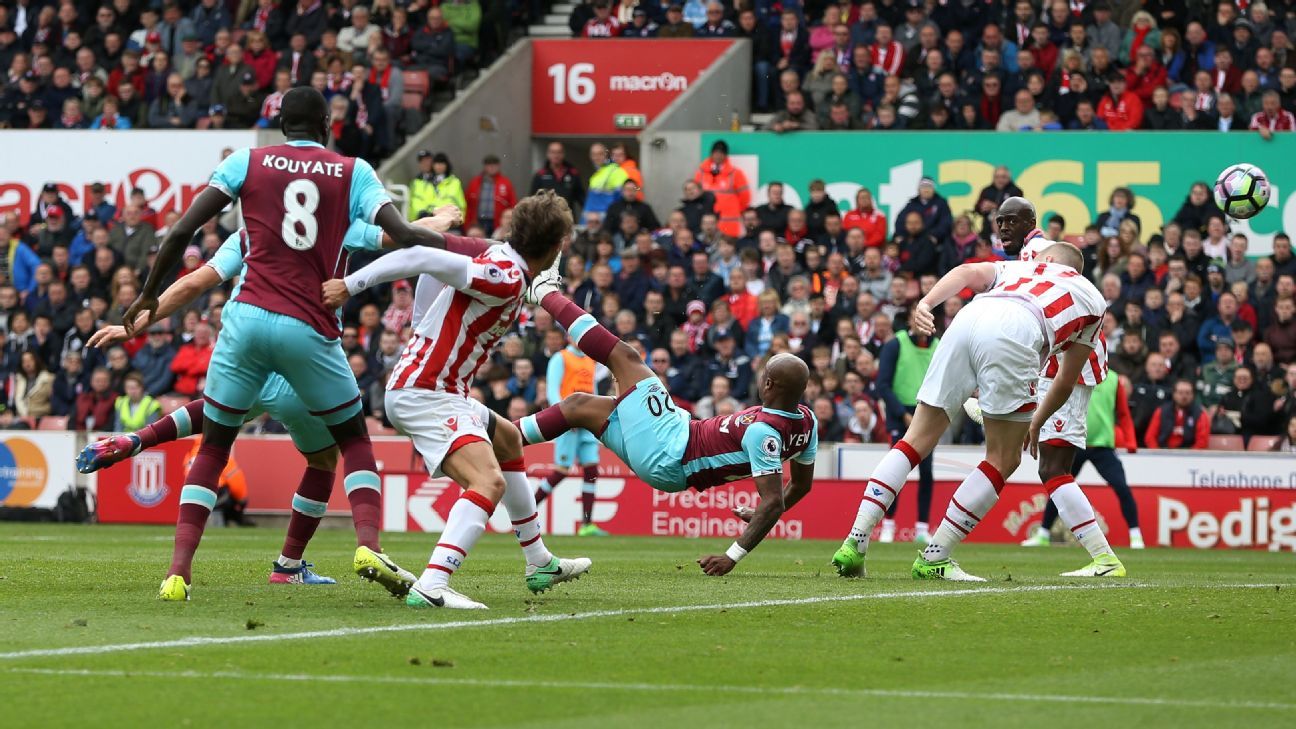 Bilic decided that last week’s formation, three central defenders and wing-backs, may also work this week and to be fair the defence was stout and limited Stoke to some long-range efforts and the odd chance.  What troubled me was some of the substitutions.  Let’s review each one.

Half time.  Masuaku off for Cresswell.  As I write this, I have not had a chance to see If this one was due to an injury. Masuaku looked good both defending and attacking and seeing him replaced at half time left me wondering why, and the first attack of the second half by Stoke left Creswell in knots, and we luckily escaped with no punishment.  While Cresswell settled in, we did lack momentum moving forward in that area, and it negated what looked promising in the first half.

Noble for Ayew.  Another strange decision.  It looked like Bilic was happy to settle for a point.  Ayew is not a prolific scorer, but he does have a knack for being in the right place at the right time.  Noble certainly adds more of a defensive responsibility to the game, but it seemed an adverse change, unless, as with the first one it was due to injury.  However, Ayew’s body language seemed to indicate otherwise.

Snodgrass for Calleri.  I am not a fan of Calleri.  I’ll take goals over rabona flicks but bringing on Snodgrass for Calleri when you have Fletcher on the bench seemed silly at best.  If you wanted to add pace, to provide an outlet, then bring on Feghouli.  We took a point, but it showed that we are incredibly thin at the striker position or even someone who can play in that role.

Two clean sheets. I cannot complain about that.  I do like playing with three central defenders, but I hope that Fernandes, camped out as the left-wing back is not something we stick with as I think he has a lot to offer in his natural position, which in my mind is central position looking to attack. I am also really starting to see the potential of Masuaku.  The last couple of games he has shown off both his defensive and attacking skills, and with a full pre-season, he could cement his place in the team. However, that does beg the question of where that leave Cresswell.  Competition is good, but do we have the ability to keep both players? Will one of them want more playing time over the other and cause issues?

Adrian looking back to his best

As someone who was happy to see Adrian replaced after his antics against Stoke in the reverse fixture, I am pleased with his maturity and skills over the last two games.  When Randolph was between the sticks, there was always a fear that he would lose the game for us and in some cases, he did lose us some points.  With Adrian, back, there seems that calm has come over the team, something I didn’t think I’d ever say. Adrian seems focused on the team, and less about himself, his antics and trying to make every save look world class. He seems very grounded. Teams in the Premier League who have diligent sensible and confident keepers thrive far better than others.  I’ll take three more clean sheets to wrap this season up.

It’s been a strange season in more ways than one.  I don’t think we have gone through four games without drama (always nice to have HRMC pay a visit) or some positive things happening.  One of the positives has been the partnership of Nordtveit and Kouyate. A few weeks ago the positive was Obiang and Kouyate.  Now let’s fast forward to next season, and I’ll assume we stay up.  Obiang is clearly a player we want to keep and a starter as is Kouyate.  Now keep looking; Nordtveit, Noble, Fernandes, and some youngsters all seeking to be part of that group.  It’s going to be a crowded defensive midfield area.  I would hate to see any of these players leave and to be honest, I don’t think any will, but if we do bring another one in, then Obiang could be the one that generates some interest in the transfer market. He has the best market value and is probably the most rounded player at that position. We have to be careful that we don’t subtract by addition.  Something we did last year when we thought that Tore and Feghouli would upgrade our wings, and to compound matters the January signing of Snodgrass.

We can argue all day about the potential of Calleri.  Against Stoke, he skied a pull back into row z and tried to be so smart in scoring when all he needed to do was push the ball slightly to the left and strike it hard and low.  At that moment, if he had done the basics, 3,000 odd fans would have been delirious. Instead, we are left to wonder who might score the next goal.  Carroll might be fit but won’t last a full 90 minutes.  Sakho will be sulking, even if he shows up. Calleri can’t hit a barn door from 12 yards, and Fletcher seems to be the kid who gets picked last at school. So, if you can tell me where the goals are going to come from on Friday, please write your answers on a postcard and send them to me no later than Thursday. Maybe the winner can get a Blue Peter Badge and play up front.

Roll on Friday, and with a win, it will be a great way to start the weekend, killing off our bitter rivals Premier League hope, just like last year and maintaining Premiership survival.