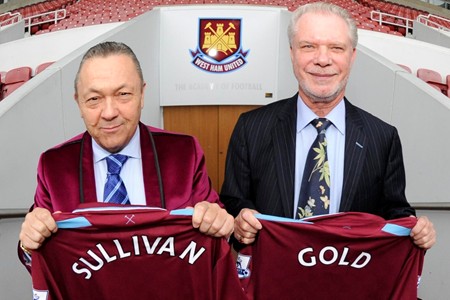 Well few will disagree, I have been amongst Messrs Gold and Sullivan’s harshest critics, if not the harshest of them all, from the off. I had been well briefed about them, before they even set foot on The Boleyn Ground. A couple of friends of mine, Birmingham City fans, had warned me how they rolled. They would overplay The Club’s debt, as an excuse for not investing in the transfer market. Always reminding Brum fans how they had ‘saved’ them. During season ticket renewal time, they used their many contacts in the media to spin fantasy land stories, linking Brum to this star or that. Phantom ’bids were the order of the day. ‘Bids they knew perfectly well, would not be accepted. Either offering the club selling the player peanuts, or offering the player personal terms, that they knew would not be accepted .Then they would say “they tried”. They also had a tenancy to undermine the manager at every turn .The transfer strategy was to sign a lot of distinctly average players, with Sullivan always signing cheap imports from South America, via their trusted agent at the time. Barry Silkman. Believing that one of them, would turn out to be the next Messi. Of course this never happened !So it’s no surprise, that Birmingham City suffered three relegation’s during Gold and Sullivan’s tenure at St Andrew’s.

The one relegation, came off the back of a season when Brum had finished ninth. The previous season Mikael Forssell had scored a lot of goals for Brum, he got injured during the relegation season. Gold and Sullivan never signed another striker, and down went Birmingham City. Another thing that used to anger Birmingham City Fans ,was they would have a tendency to flog star players, during the last days of a transfer window, not replace them, and say they “Ran out of time “to bring in someone else. People …this on the face of it is, exactly how they have operated at West Ham. As soon as they arrived they lived up to my expectations spectacularly. Over and over we got told they would not have bought the club if they were not fans, we got told how The Club had lent money against the following two years season tickets. We were a financial Armageddon was another line on an almost daily basis, we were left in no doubt they were West Ham’s ‘Messiah’s’

I remember their first two transfer windows very well. We had David Gold telling us they were prepared to spend £100 000 per week on a top striker, with Ruud Van Nistlerooy being heavily linked with The Club .The reality was Mido signed on £1000 per week. The first summer transfer window was an eye opener. Seventy two hours before the expiry of season ticket renewals, came this gem on The Club’s website: “The club is expected to sign six exciting players in 72hrs “The reality was Freddie Piquionne and Pablo Barrera. So a pretty damning start by any stretch of the imagination of their legacy at Brum. The   truth will always set you free they say. Ignoring my mate’s opinion of them, there are three ABSOLUTE FACTS about Gold and Sullivan’s tenure at St Andrews. They most certainly left The Club better off, than when they arrived at Birmingham City. When they arrived at St Andrews, The Club was heavily in debt, and in the third tier of English football.  With a Ground that was falling apart .Well they changed all that. They rebuilt St Andrews, had reached The Premier League, and were in the black by the time they left. Leaving aside the pure the theatrics of it all, one would have to say their time at St Andrews was a success.

This season in particular, many have told them to sell up .As frustrations have built regarding the transfer window failure. But sell up to who? Whatever one’s opinion of Gold and Sullivan, they DO know how to run a Football Club.  They   know how and where to identify players, Sullivan in particular, is heavily involved in transfers at The Club, his experience shone through in the deals of both Tore and Zaza. He saved he club millions, by taking them out on loan first rather than buy them outright. What is the alternative to Gold and Sullivan? Owners like the owners of Blackpool Orient, Charlton and Leeds to name a few? People are not lining up to buy football clubs, post the financial credit crunch of 2008. And the Chinese buying our football Clubs? What would happen if the Chinese economy collapsed? Do you think they will stick around? Like hell they would! People think if a Billionaire buys a Football Club, they automatically splash the cash in the transfer market. Not now. You only had to look at the hysteria, created by the Everton takeover, to realise that. Ronald Koeman, would be able to spend a HUNDRED MILLION in the transfer window screamed the tabloids. Everton sold Stones for 50 million…and loaned Enner Valencia from us, says it all really!

Another mate of mine, who is a huge Aston Villa fan, hated Doug Ellis, The Villa owner before Randy Lerner. “DEADLY DOUG OUT! “Was his battle cry. When Lerner bought The Club I kept hearing ” ‘Uncle’ Randy is going to spend MILLIONS in the transfer window!” To be fair to Lerner, he did spend millions in the transfer window. In the last couple of years before he sold Villa, Lerner hardly spent a penny. As Villa slid down to The Championship, my mate startled me one night when he said: “I wish Deadly Doug had The Villa! “WHAT??“ I replied. He then said that the big problem with Randy Lerner was, that although he tried, he was out of his depth in the transfer market for starters. “What do you mean? “I asked. “Well he paid £31 million to your lot for Reo Coker, Collins and Harewood for starters” he replied. He had a point. Sunderland are in exactly the same boat now, Ellie Short, their owner wants out but can’t get rid of The Club. Can any of you imagine that scenario at West Ham? No chance!

Many think I HATE The Board and WANT them to fail. Rubbish! If The Board fail, West Ham fail, so that is a no go. I have my fair share of clashes with them on twitter and the rest !I had one run in with @DaveSulleyjnr,on twitter after we failed to bring in a striker on transfer deadline day. Dave, who was 14 at the time replied: “Support your Club! You moron!” Of course it kicked off, with fans saying that he had no respect for the fans. Me? I had a huge grin, poured myself a Jack Daniels and thought:”Fair play he stuck up for his old man” I have had sporadic contact with Dave since, and I will vouch for him. Nice guy and bright, and an independent personality. My dialogue with Dave left me an impression of Sullivan in particular. Like most human beings they have their faults, deep down they are not bad people running The Club. What we don’t need is the constant lies and spin. No need to leak stuff like we are ‘closing in ‘ on Messi and Neymar! It just causes a negative vibes between them and the supporters! We understand that David Sullivan, the majority shareholder, although a billionaire, only has £500m in liquid assets. So cannot go paying 40m plus wages at a time, for three or four players at a time.

When you look back at the squad we had when they took over.  You can see that they HAVE made progress! Back then we had the likes of Spector, Kovac and Boa Morte in midfield, we were paying Kieron Dyer NINETY three grand per week! Dyer made Sakho and Carroll look like ever presents, such was his sick note record. Back then we only dreamt of players like! Payet! Lanzini! Kouyate! Song! Carroll, Fonte! Ayew to name a few players, that they have brought to The Club .Even some of last summer’s recruits are coming to life, and doing well. Fernandes and Arthur Mausaku, spring to mind. Mausaku is proving to be a revelation, just hope he does not suffer second season syndrome. Sam Byram is another signing who is coming along nicely. The future is most definitely Claret and Blue. Like it or leave it, Gold and Sullivan own The Club that will not change. No realistic takeover bid on the horizon, so it’s got to be ….Gold and Sullivan in.

We are more than a football club, we are a way of life!