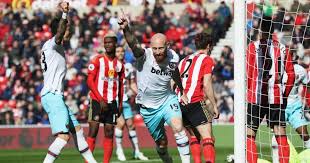 Andy Carroll says the West Ham fans showed their power during the 1-0 win over Tottenham in May. (Standard)

I am glad Ginge isn’t retiring just yet, but his West Ham future still remains unclear. I do hope that he remains with us until he retires, because he is a hero to this club. In my opinion, he deserves a new contract for his contribution to the team this season.

The West Ham United sign outside the London Stadium is being dismantled this week, as the stadium prepares for the IAAF World Championships. (Standard)

Reece Oxford is set to join Borussia Monchengladbach on a season long loan deal. (The Sun)

This is a very odd rumour, but strangely I think it could work out for everyone. Recce will gain a lot of experience in a good league and he will learn a lot from his time there. Ideally, I would like to see Reece stay and gain experience with us, but that is going to be hard for him with our current options.

Southampton are in contention to sign West Ham’s Robert Snodgrass this summer. (HITC)

If this is true, then I would consider a swap deal including Dusan Tadic. Let’s be honest, not many people would be sad to see Snodgrass leave, and Tadic is a level above him. Tadic would be a very good signing for us in my opinion, and I am interested to see how this one turns out.

I do not understand this. I don’t see why we would potentially loan Reece Oxford out and then sign another defender. To me, it makes sense to just keep Reece and give him a chance, instead of spending more money on another defender. Raggett may be a good player with lots of potential, but Oxford has been tipped as the future of English football.