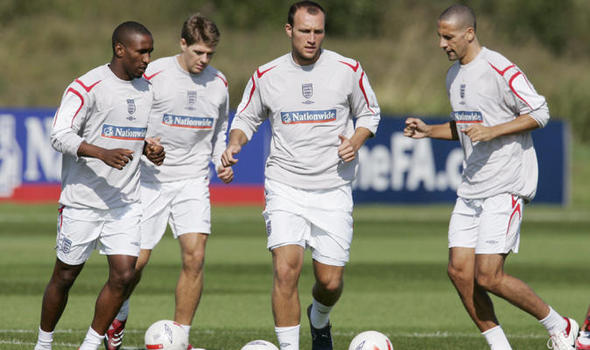 He had pace that belied his size and a hunger to prove himself at the highest level of English Football. A poacher with the innate ability to find the back of the net with both his head and his feet, Dean Ashton was arguably the most natural goal scorer England had produced since Jermaine Defoe and would produce until the emergence of Daniel Sturridge and Harry Kane.

Ashton joined the Hammers at 22 years old for an initial fee of £7 Million – an amount that could easily be triple that in today’s market. How far he could have gone and what he could have achieved in game we will never know as he was forced to cut his career short and call time only four years later.

In the 2005/2006 West Ham had just made their return to the Premier League. After finishing sixth in the Championship and getting promoted through the play offs the clubs early form stunned critics and pundits as they made a mockery of early predictions of a relegation battle by dabbling in the top half of the league. Yet, the strike force did need some work. Boasting Marlon Harewood – who was in the midst of his best spell for the club – an ageing Teddy Sheringham, the all glitz but no goals Jeremy Aliadiere and Bobby Zamora who had not yet been able to turn in the level of performances at the top level that we would see from him in the following season. It was clear as it has been for so many years since that we were lacking some firepower. Alan Pardew would turn to one of the most talented prospects in the country and for a record fee, Dean Ashton would be set to lead the line for West Ham for years to come.

His career would begin in 2000 as a 16 year old coming through the ranks at Crewe Alexandra. He would be described later by his first manager Dario Gradi as “the best finisher he had ever worked with”. His first professional goal came aged 17 in a 4-2 victory over Burnley. He would end his first season with eight crucial goals in Crewe’s fight against relegation the first division. He quickly established himself as one of the most promising young strikers in the country and would go on to score 61 goals in 158 appearances for Crewe. He would represent England at Under 17’s, Under 19’s and Under 20 level. He made a scoring debut for the Under 21 side in a 3-2 victory against the Netherlands on the 17th February 2004 after converting a cross from future strike partner Carlton Cole. He would make a further 8 appearances for the Under 21 side, scoring 3 goals.

Ashton would soon get the chance to prove himself in the Premiership when he signed for Norwich for a then club record fee of £3 million in January 2005. He made an instant impact by scoring on his home debut in a 4-4 draw against Middlesboro and would go on to prove that he was more than capable of playing in the highest division by bagging 7 goals in 16 games. Unfortunately his goals were not enough to save Norwich from relegation that season.

On the 22nd January 2006 West Ham announced the signing of Dean Ashton. He made his debut during the 3-2 victory against Arsenal, helping the Hammers to become the last team to defeat Arsenal at Highbury. He then scored 3 in his next 3 games in victories against Sunderland and Birmingham and a 2-2 draw with Everton. He was pivotal in the FA Cup run of that season, scoring twice to sink Manchester City in the Quarter Finals before doubling the Hammer’s lead in the ill-fated cup final against Liverpool.  Dean Ashton had made an impressive start to his West Ham career, leading the line with guile and fortitude that made him a thorn in the side of any defence he came up against. He had the dream of representing his country at the 2006 World Cup. His form in the second half of the season, coupled with his work rate and natural goal scoring ability suggests he should have been given that chance. Instead then England Manager Sven Goran Erickson picked unproven 17 year old prospect Theo Walcott as his fourth striker instead of Ashton.

He got his opportunity to fulfil his dream for the first time in August 2006. Unfortunately it was an incident in a training session that had geared toward him starting in a friendly against that would mar and define his career. A challenge by international team mate and then Chelsea player , Shaun Wright Phillips, that would shatter his ankle. Left on the side-lines to go through a gruelling rehabilitation, Ashton could do nothing but watch as his opportunity to play for England would come and go. In his absence West Ham would struggle domestically and flirt with relegation before dramatically surviving on the final day of the season.

Dean Ashton would work his way back to something resembling fitness for the beginning of the 2007/2008 season. The loss of cartilage in his ankle was so severe that his bones were rubbing together when he ran, something he once described as making a “crunching” sound. Despite still being in pain the desire to return to the pitch would win out and even though he was never anything close to 100 percent he ended the season with 12 goals. In June 2008 he would finally make his England international debut in the friendly against Trinidad and Tobago. After scoring twice on the opening day of 2008/2009 season Dean Ashton would require further medical attention. He underwent a procedure to fuse the two fragmented pieces of bone together and on the 11th December 2009, he would follow medical advice and retire from professional football, aged only 26.

In an era where players regularly do not reach their potential because of outside distractions and fragile mind-sets Dean Ashton stands alone as a man who had the hunger, the drive and most importantly the ability to be a striker of the highest quality. He was tenacious and graceful, and to this day aged only 33 still has the eye for goal that the Hammers so often lack – as he reminded us all with his overhead kick during his cameo appearance at Mark Noble’s testimonial last season. With the exception of the short spells of Carlos Tevez and arguably Demba Ba, the club have been unable to replace with anyone who had the same quality that he had and certainly not with anyone who had the potential to be the player he could have become.

Looking back on a career that should have lasted a lot longer we are left thinking how different the last ten years could have been if we had had a striker who had half the ability of putting the ball in the back of the net that Deano had.