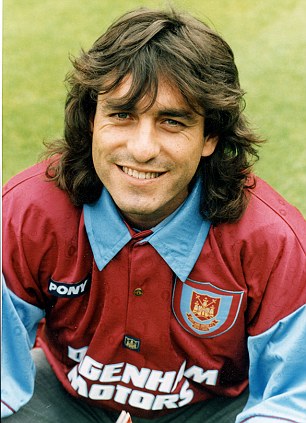 Harry Redknapp and Peter Storrie stood open-mouthed in the away changing room at Highbury.

The fixture list hadn’t been particularly kind to West Ham. A season-opener away at Arsenal was a tough start to the new campaign. But even the most pessimistic souls couldn’t have foreseen the chaos unfolding before their eyes.

Above ground, thousands of Hammers had amassed in the away end, anxiously awaiting sight of one of the most famous footballers of his generation.

Meanwhile, deep in the bowels of Highbury, a colossal shitstorm was brewing.

Such was the consternation that Harry Redknapp had sent foul-mouthed word to the Director’s Lounge, where Storrie was enjoying his sumptuous pre-match refreshment, that he was required in the dressing room immediately.

Before a ball had even been kicked, West Ham were dealing with their first crisis of the 1996-97 season.

Paulo Futre, the Portuguese genius, was refusing to play..

After years of under-achievement in Europe, the once-mighty Bayern Munich were rising again. Brehme, Matthaus and Rummenigge looked set to crown the brave new dawn of West German football.

All that stood between them and glory was a much-unfancied Porto side, led by the prodigious left foot of Paulo Futre. The 21-year-old maestro had inspired Porto to successive Primera Liga titles, earning comparisons with the magnificent Diego Maradona.

For 45 minutes, everything went to plan for Bayern as they secured a 1-0 lead at the interval. The second half saw one of the most virtuoso displays in the competition’s history. Porto’s prodigy produced a masterclass, dropping deep and drifting past players at will. Bayern crumbled in the face of his brilliance. Porto scored twice and were crowned champions of Europe.

Paulo Futre had the world at his feet.

A money-spinning move to Atletico Madrid followed. The Portuguese become an instant hit in Spain before a succession of crippling knee injuries took their toll.

Each time the Atleti fans would pray for their hero’s speedy return. And each time Futre would come back a paler shadow of his former self. After five seasons, it became painfully clear that his time had been and gone.

Stints in Italy followed. A spell with Reggiana – where flashes of majesty convinced Milan to come calling – was as good as it got. He made a solitary league appearance at the San Siro before he was released into the football wilderness.

Having barely played football in two years, he was now officially a football journeyman. That night against Bayern was a lifetime ago. He was a has-been. A crock. All set for football’s scrapheap.

Then along came Harry.

Harry Redknapp had established much-needed stability in the East End of London. The Hammers had finished 10th the previous season, their best top-flight finish since the heady days of ’86.

He’d developed a reputation as a shrewd operator in the transfer market. He’d brought back fan favourites Tony Cottee and Julian Dicks on cut-price deals and dabbled successfully in foreign currency, signing Slaven Bilic for peanuts from Karlsruhe.

The next deal would be his most outrageous yet. He and Peter Storrie started talking to Paulo Futre – a player who could potentially take them to the next level.

How the Portuguese passed the medical at Chadwell Heath remains one of the game’s great mysteries. In medical parlance, he was knackered. Even West Ham’s basic x-ray equipment, presumably sponsored by Fisher Price, would surely reveal his kneecaps were held together by chewing gum and a piece of string?

Apparently not. Harry, always comfortable spending other people’s money, decided to risk it. He was a top, top player after all.

Paulo Futre, a man recognised as one of the best number 10’s in football history, was now officially a West Ham man.

The shirt was hurled I back into a startled Eddie Gillam’s face. The erstwhile kitman reeled in shock.

His crime? He’d handed Paulo Futre a shirt with number 16 on it.

Short of defecating on his ancestors’ graves, Futre could not comprehend a greater insult. One of the world’s most famous number 10’s was being denied his rightful shirt… because of John Moncur?

Whilst Gillam faced an existential crisis, Redknapp tried his best to diffuse the situation. The shirts had been printed. Thousands of Hammers fans’ were proudly sporting “Futre 16” in the away end. Couldn’t they sort it out later, old son?

Fuck you. I no play.

A frazzled Peter Storrie arrived, still chewing the last morsels of his chicken cordon bleu, to mediate. Yet Futre would not be calmed. He changed into his civvies and headed for the taxi rank.

The teams had been submitted to the referee and by law, no changes could be made. Futre, now halfway to Canary Wharf, was due on the pitch in a matter of minutes. West Ham would have to start the new season with ten men, unless Redknapp could muster up some magic.

The Hammers boss marched into the referee’s office and did the decent thing : blamed it on his assistant, Frank Lampard Snr. Dear Old Frank, never the best of spellers, had forgotten his glasses. He’d meant to write down Stevie Jones, the workhorse forward signed from Billericay, and scribbled the name of Portugal’s greatest footballer instead.

It was an honest mistake. Could have happened to anyone.

The referee accepted the unlikely excuse. West Ham started the game with eleven players, who duly rolled over and lost 2-0.

Damage limitation began the following week when Futre appeared, his legal team in tow, to convince Moncur to transfer ownership of the shirt. Moncur was hardly a student of the law. In fact, his main pre-occupation at the training ground was running round the pitch, genitalia whistling in the wind, wearing nothing but his football boots.

However, the madcap midfielder knew a good deal when he saw it. Futre offered a six-figure sum and two weeks in his private villa in the Algarve. The shirt crisis had reached an expensive conclusion.

Futre made his debut in a half-time cameo against perennial strugglers Coventry City. In an ominous sign for the rest of the season, the Hammers were outplayed by the Sky Blues in a truly dreadful first half. It took the introduction of the Portuguese to inject some quality into the game. Despite his limited mobility, he was comfortably the best player on the pitch. He dragged his new team back into the game and helped secure a precious point.

His second appearance in Claret and Blue was his most memorable. Southampton were the visitors to Upton Park and Redknapp, buoyed by the impressive cameo against Coventry, gave his star man a starting place. He was rewarded with a stellar showing that put the rest of the Premier League on notice: Paulo Futre was far from done.

The Hammers’ number 10 was peerless. Rolling back the years , he ran the Saints ragged, creating a succession of chances that West Ham’s forward line – lead by Dowie – contrived to spurn, before Julian Dicks scored a late winner.

The dream lasted another 34 minutes. A typically robust tackle from Wimbledon’s midfield folded Futre like an accordion. He lay prone on the turf clutching his knee. Eventually he hobbled off, wearing the grimace of a man who knew he was done.

There was a feeble attempt to come back. But the game was up.

His last start at any meaningful level of football had seen him upstaged by Efan Ekoku, who powered the Dons to a 2-0 win.

Alongside Futre, Romanians Ilie Dumitrescu and Florin Raducioiu had proved unmitigated disasters. After the embarrassment of Marco Boogers the season before, Harry Redknapp decided to postpone his foreign shopping trips.

Faced with near-certain relegation, he rolled the dice on two domestic signings. Paul Kitson and John Hartson arrived from Newcastle and Arsenal respectively. Their goals saved West Ham from the drop.

The sun finally set on Paulo Futre’s career during another injury-hit spell with Yokohama Flugels. His spell at Upton Park had been brief but wholly memorable.

He’d given West Ham fans a reason to dream the impossible, only to see it fade and die.

Football can be a cruel mistress.

Bio: Sid Lambert is a historical football writer, who recently released his new book Cashing In: the story Ray Cash, a 19-year-old footballer making his way through the murky world of the Premier League back in 1992, when football changed forever. You can buy it here.