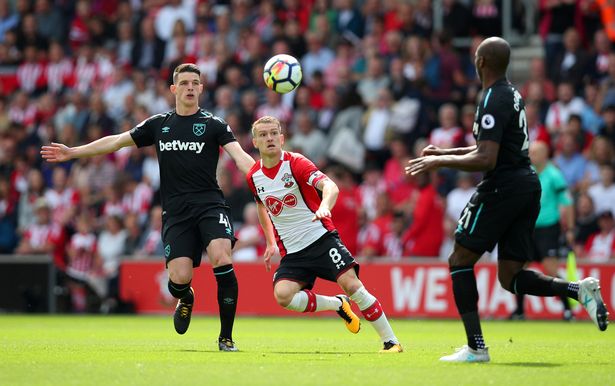 West Ham fell at St. Mary’s today 3-2 in an up-and-down match that saw both moments of brilliance for the currently homeless Hammers, and moments of indiscipline, which cost West Ham the match.  Slavin Bilic’s side completely had the wheels come off late during last Sunday’s opener at Old Trafford. (Swansea fell victim to the same fate today) And it looked as if the Manchester United hangover would continue today, as West Ham’s opening half almost went as poorly as possible.

West Ham found themselves 2-0 down, and down to 10 men after 38 minutes due to Manolo Gabbiadini’s opening goal and a Dusan Tadic penalty kick; which along with Marko Arnautovic’s red card in the early minutes of play, showed the worst opening moments any Hammer supporter could hope for.  This doesn’t even include Winston Reid being stretchered off the pitch during opening warm-ups, suffering from some form of calf injury.

Michael Antonio and Havier Hernandez finally gave the vocal West Ham visiting fans something to cheer about in the 44th with Antonio’s shot from the edge of the box earning a save from Forster, but Chicharito cleaning up the rebound.    With a 2-1 deficit and only ten men, securing at least a point looked challenging, but momentum was on West Ham’s side.

That momentum carried over into the 73rd minute when one of Aaron Cresswell’s signature crosses found the head of Diafra Sakho, but his header met the crossbar.  Once again Hernandez was present to strike the rebound into the roof of the net.  With the match at 2-2, and Chicharito sporting a brace, Bilic looked to hang on and at least collect at least a point.

However, three minutes into the stoppage time, Pablo Zabelta, with Jose Fonte, clumsily brought down Maya Yoshida, as the defender chased James Ward-Prowse’s cross, giving Southampton another penalty and Charlie Austin left no doubt as he scored the game winner.

As devastating as this result was, there were some bright spots.  Obviously, Hernandez’s scoring ability seems as strong as advertised.  The return of Antonio was a success.  Hopefully having Kouyate, Carroll, and Lanzini back in action will open up the West Ham attack to where Chicharito will have more opportunities.

During the match, the lack of discipline was stunning.  While Zabaleta and Arnautovic are new to the club, Bilic will have to direct his starters to keep their heads about them.  Last season West Ham was the most red carded side in the league.  This league is unforgiving enough without playing almost an entire match with ten men.

Hopefully as the summer transfer window comes to a close, the club’s position at the bottom of the table will not turn away any of the prominent targets we have bid on during the final two weeks.  The board have made some great moves and once this team is at full strength, the wins will come.  West Ham were the better team today, but with two spot kicks and a red card, it is nearly impossible to win anything as a visiting club.  It will be interesting to see how Bilic selects for the midweek League Cup match.  While this team is in desperate need of a victory, it can ill-afford to suffer any more prominent injuries.  Stay tuned to The West Ham Way for all the information as the summer transfer window comes to a close.