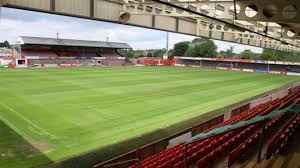 And so our cup adventure starts. I think we played very well to come back and level from 2-0 down with 10 men against Southampton away from home too! Some of the negativity has been well over the top. I’m expecting to see a weaker 11 for this game, but let’s hope the players coming into the side have a point to prove.

Despite being built in 1927 and being the home of Cheltenham Town since 1932, the LCI stadium didn’t host senior football for 67 years. Two of the stands have been renovated/built in the last 20 years, including the Hazlewoods Stand (2005) and the Thomson & Bancks stand (2001). There is a small electronic scoreboard on top of the roof of the Hazlewoods Stand.

The view of the playing area is said to be good. Away fans are seated in the Hazlewoods Stand and sometimes, if required, the Thomson & Bancks stand.

Cheltenham Railway Station is over 2 miles from the stadium, so it is advised to get a taxi or bus from the station to the ground. Bus service D runs from the station car park to the Town Centre every 10 minutes and costs £3.40 for an all day ticket. From the town centre, it’s a short walk to the stadium down Prestbury Road. You can get the bus going the other way after the game, where it stops outside a Tesco near the station.

If you wish to drive, enter GL52 5NA in your sat nav or follow directions below.

From the M25, leave Junction 16 onto the M40. Continue on the M40 until Junction 8, where you come onto the A40. Stay on the A40 until you come to the B4075 on your right and turn down there. At the end of the road, turn left, then right onto Cleeve View Road (Berkhampstead School will be on the corner). At the end of Cleeve View Road, turn left, and you will see the ground on your right.

Parklands Social Club (mentioned below in the food and drink section) has car parking available for £4 if you wish to park your car there.

There are limited spaces available to park at the stadium (at a cost of £5), but you can pre-book with Cheltenham by calling 01242 573 558 (*according to grimsby-townfc.co.uk). There isn’t much space for street parking nearby.

A club bar nearby called Robins Nest allows a limited number of away fans for £1 admittance.

Kemble Brewery Inn on Fairview Street is listed in the CAMRA Good Beer Guide, which has always proved popular when visiting football grounds on away fixtures.

Very near the ground is the Parklands Social Club, which has a few TV screens.

Let’s hope this fixture can be the start of a memorable cup run for us this year. Stay safe and enjoy the game, Come On You Irons! -@CraigPodevin