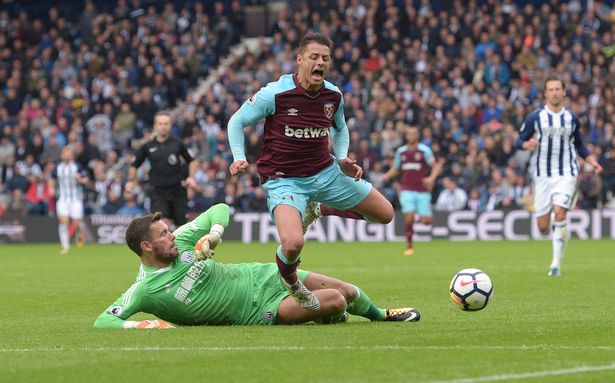 West Ham played a scoreless draw today in action against West Brom.  Neither team was able to muster much offensive firepower as both teams recorded only a single shot on target.  While this was a dull affair to watch for the passive football fan, it did give West Ham a much needed point and was notable as Slaven Bilic’s side now have gone back-to-back matches with clean sheets.  Given, the poor start to the season, this was of good note.  The low point of the match was losing James Collins to injury midway through the match. His status is unknown

West Ham’s best action was a Michail Antonio shot from about 20 yards out that Ben Foster had no trouble collecting.  Moments later it looked as if Pedro Obiang would have the play of the month as he saw Ben Foster off his line and crushed a strike from 40 yards out that, unfortunately, met the crossbar.

The Baggies single strike at Joe Hart was a Hal Robson-Kanu header that Hart handled without too much difficulty.

The greatest drama of the match came in the 66th minute when Javier Hernandez was challenged just outside the penalty area by Ben Foster, in a tackle that earned Foster a booking.  Had there not been other defenders in the vicinity, it is probable that Paul Tierney would have sent the goalkeeper off.  Plenty of West Ham supporters voiced their feeling that Foster’s challenge did earn a red, but the center ref was content to limit the penalty to a yellow, and West Ham subsequently failed to threaten on the ensuing free kick.

By the five minutes of added time, neither team seemed to have enough creativity in their attack to threaten and take all three points.  Fans at the Hawthornes began their exodus as early as the 80 minute mark, and neither group of supporters had much to crow about after the match.

For Bilic he has found some consistency in defending, although James Collins has been a big part of their recent form.  He will certainly be out for the near future.  Much has been voiced about Chicharito’s play at wing, and his lack of chemistry with Andy Carroll, but early in the season and with Carroll only two games into his own season, hopefully the duo can find their stride (before Andy’s next injury).

West Ham has a short week before they host Bolton in the third round of the League Cup.  That is followed by a visit from Spurs to the London Stadium.  After a long spell of games away from home, finally the Hammers can play some football in front of their own fans.  Hopefully over the next week Carroll and Hernandez can develop a rhythm together.  Possibly the return of Manuel Lanzini can spark some service to those talented attackers.

While today was a frustrating day, West Ham has suffered 9 draws out of 14 matches with West Brom.  Playing against Tony Pulis can as challenging as fighting a hill of Texas fire ants, but taking a point at the Hawthornes and living to fight another day, isn’t the worst outcome Bilic could have had.