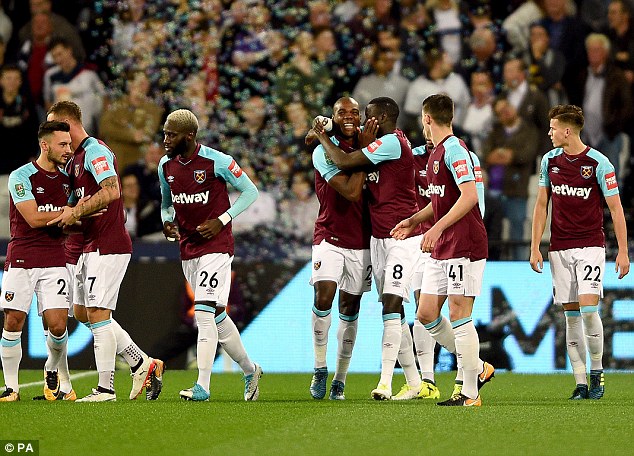 After a slow start to the 2017-18 Premier League campaign, West Ham has had some fortunate breaks in the week, taking victories from lower level competition in the league cup.  Tonight West Ham defeated Bolton 3-0 in a Tuesday evening third round tie at the London Stadium.  While the crowd was a bit sparse, the home supporters were treated to a well-played match by a mix of first team regulars and some less prominent youngsters as well.  It was the first team debut of  Sead Haksabanovic, the new signing from  Halmstads BK.  Haksabanovic along with Diafra Sakho and Andre Ayew, kept the pressure on the visiting club.

Moments after the opening kick, it was Angelo Ogbonna who opened the scoring with a monstrous header off the service of Marko Arnautovic in the fourth minute of play.  The Hammers didn’t let off keeping the action in the Bolton half of the pitch for most of the opening half.

Only 30 minutes into the match, Arnautovic was at it again, raking the ball back to Sakho who easily scored from eight yards out.

For Bolton, their first attempt of the half did not come until late when Aaron Wilbraham headed straight at Adrian from a Craig Noone cross.

The second half saw no changes for Slaven Bilic during the break.  His team had some chances early on but the score sheet remained unchanged.  During the half Bilic brought on Nathan Holland, Javier Hernandez, and Domingos Quina for some late action.

The visiting club didn’t go without showing some late match spirit.  In the 85th minute, Mark Beevers had a good header off a corner but his attempt was straight into Adrian’s arms.   Jack Earing also had a late shot that looked promising but Declan Rice blocked.

The final gift for the remaining fans was a spectacular shot by Arthur Masuaku, as his screamer hit the top right of the goal for the final score of the evening during the added time.

At this point no one is sure what West Ham’s League Cup or FA Cup prospects will be.  Bilic has said both are a priority in this season without any European play.  However, with a club that has taken only four points out of 25, survival in the Premier League has to be the priority.  As long as the draw for these cup ties continues to favor the Hammers, the fans in East London might as well enjoy nights like this.  With Spurs coming to the London Stadium during the weekend,  the local fans should enjoy an easy 3-0 victory while they can.