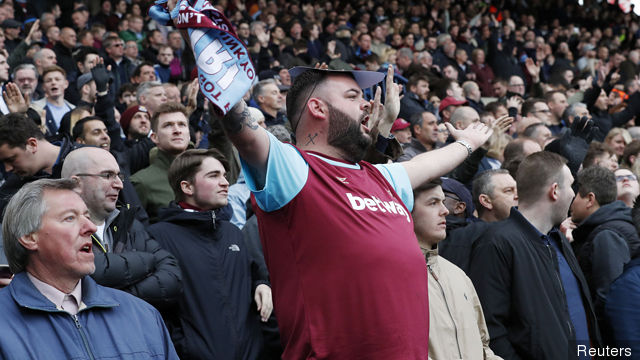 In recent years I have heard many people complain about the passion of fans not being the same as in years gone by….to them I say, you are talking out your arse! Even this past week, some muppet felt the need to call out a father with his daughter at the London Stadium on Twitter. Who would you rather have sat next to you on a Match Day, a father and his daughter enjoying the game or some Stone Island wearing muppet, shouting abuse and swearing all the time? And which one of the two do you think does nothing but site the “lack of passion” in modern football?
Now I totally understand and agree that the famous atmospheres I was lucky enough to experience at the old Wembley, The Boleyn and some of the feistier derbies around London I’ve experienced are few and far between, however this watering down has allowed for a much safer and family friendly experience.

Which is not to say it is perfect, there are numerous aspects of this “watering down” That I am not a major fan of….for example; the prawn sandwich brigade! Leaving seats empty till long after the kick off or simply just deciding not to turn up because of the “lesser games” they’ll often do little more than fire off some emails or shake their heads at those singing over the 90 minutes….We could even make a case for them raising the coast of tickets these days.
But they aren’t abusing anyone within the game!

This sanitising of our football grounds has lead to a new problem with the modern day football fan, the attitude of entitlement and accessibility with which fans can vent any frustration they have with just the press of a button directly at a player. Darren Blewitt and all on the radio show said it best last night, there is no respect with a lot of football fans these days, I understand the frustration when players are on huge sums of money, every week and tickets are not exactly cheap. But in reality all that means is that you can go to the game, hopefully back the team, even protest, shout and throw an inflatable willy about if you want, but you do it in a way that you know you can be identified. And if you want to slate a player, do so in a way that you would to their face! Would you really tell Mark Noble too his face that you wished he brakes his leg, call him a c**t or “batter” him as I saw one fan state. I bet these people would do nothing more than quiver at the knees and spew helps of praise if they were face to face Noble.

This sense of entitlement, judgement and condemnation doesn’t just stop when it comes to results, it comes to players directly, I have always been of the opinion that constructive criticism can only ever be positive in any aspect of life, but it is particularly relevant when discussing sports. I’ve coached football and gymnastics before a short time personal training, all of those jobs require the ability to assess and give feedback constructively. But once the people I coached or p.t.’d went home, the most they’d get is maybe a single unsavoury comment on an Instagram post, or worst case, a few school kids teasing. None of them faced the disgraceful barrage of hateful, even threatening tweets we see after almost every game!

This leads me onto a new side of coaching that has emerged and really needs a bigger stage in sport, the psychological side of management. This is perhaps most relevant in youth players these days, for example just yesterday, I found myself scratching my head at some of the responses to the news that Reece Oxford is frustrated at the lack of starts on loan at Mönchengladbach. Many saying he was “over rated”, “waste of talent” or “not the prospect we thought”…the guy isn’t even 20 yet! Imagine reading that sort of thing when you are not only young and still developing, but also in a different country and have a great sense of expectation on your shoulders. That requires a real mental strength that very few possess and I believe the psychological side of the game will become more important than ever.

Now you may say “Why do footballers even need social media?”, short answer is that it is their right to be able to connect with new people within and outside of the game. If you want to ever see the next Ferdinand, Cole, Lampard or even Moore in a West Ham shirt, I truly believe their needs to be a change in mentality to many of the so called “fans” out there, as you will only ever end, cut short or limit the potential of more young footballers careers with the toxic barrages we see online! When a youth player comes on, give them the biggest roar you can, back the team over the two halves and if you want to tell Oxford afterwards on twitter “Your passing let you down today!” or even “I think you need to get on the weights!”, then by all means that is fair and constructive criticism! But calling him a heap of profanities and wishing he was injured is not, let’s be the fans our great club deserves, back the team through thick and thin like the West Ham I grew up on, but let’s remove  and report the toxic parts of our game whilst doing so!