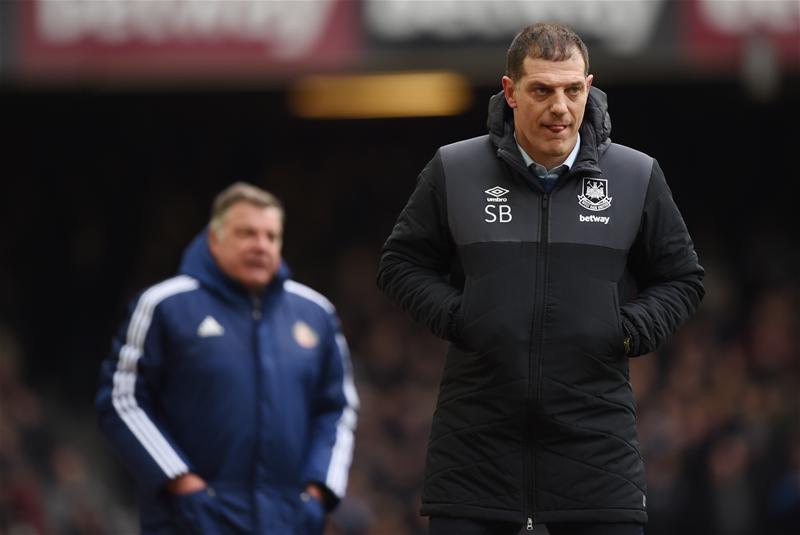 We play it on the floor, we play it on the floor, we are West Ham United and we play it on the floor, The Cusp ear episode, the self-egotistical approach to management. It is easy to see why certain sections of our fan base, didn’t take to well to Sam Allardyce. Like him or loathe him, one would have to concede that Sam Allardyce, with the help of Kevin Nolan dragged The Club up by the proverbial jockstraps. The Club had just been relegated under Avram Grant, and was out for the count when Allardyce, took the managerial reigns at The Boleyn Ground. That we are an established Premier League Club is down to one man and that is ‘Sam Allardyce’. Now I’m not advocating that we bring Allardyce back to The Club by any means, but I am in no doubt that he would have made a better fist of things, with the squad that Slaven has at his disposal! Than Slaven has done! I will go as far as to say, if Allardyce had been manager in our final season at The Boleyn Ground, with Payet and Lanzini playing at the top of their game. We would have qualified directly for the UEFA League.

Hands up, I was one of those who bought into Slaven, being one of us having played for The Club, and having managed the very attractive Croatian team. I was about to witness the much fabled West Ham ‘way’ football. Wonderfully inventive football on the deck. My own personal experience of The West Ham ‘way’, being pitching up at the likes of Charlton, Reading, Blackburn, Bolton and Luton Town, then losing 4-0 or 5-0 and the rest. Players taking the piss, and not bothering their arse, cheating on West Ham and The Club’s supporters. I had nagging doubts about Slaven before he signed, but in the euphoria of it all, I put that to the back of my mind. Besiktas supporters had warned us that he would start of well off well but would fade away soon, he would fall out with players, would make poor substitutions and was not the best tactically. I also remembered how easily Fabio Cappello, had outwitted him when he was England manager. England beat Croatia 5-1 in Zagreb, Bilic having no answers, just standing arms folded in the rain. Still it was all about Super Slav and Big bad Sam, when Bilic became The Club manager. I defended him to the hilt, loved the guy’s passion, and still do.

Sadly passion does not make you a good football manager. We have resembled an absolute shambles on the pitch lacking in fitness, shape, unbalanced and prone to basic school boy errors. That’s what happens when players lose confidence. They may like Slaven as a person, but belief in him as a football manager, has been on the wane for the best part of sixteen months. Six wins in 25 games speaks for itself. All sorts of excuses have been made for Bilic. Squad not good enough, injuries, Sullivan not landing the manager’s top targets and acting effectively as Director of Football. Yes Carvalho was not landed, and the squad is three or four players short of having a top squad. As for interference by Sullivan, no sympathy for Slaven. He had no problem outing Dimitri Payet, so I presume he would be prepared to take Sullivan to task, if he was out of order.

And Sullivan’s role as director of football? I have always been of the opinion that the manager should have the final say in transfers. I still do. But I also understand why Sullivan, and a few others have an input regards Club transfers. One of the greatest myths is that Bilic identified Dimitri Payet. No he didn’t. Payet was first identified by Allardyce and his team, as far back as 2013. It was David Sullivan who brought Payet to The Club. While interviewing Marcelo Bielsa, for the vacant managerial position, he asked Bielsa, if he could bring one player to The Club who it would be. Bielsa identified Payet. The rest is history. What made me really baulk, was when Slaven, tried to bring in Atiba Hutchinson 34 to The Club for eight million pounds. That on the back of bringing Gokhan Tore to The Club. The player arriving on a very expensive loan deal and big wages. So one can understand why Sullivan, wants a hands on role as far as transfers are concerned. Although he has not got a perfect squad, you can bet your bottom dollar, Bilic would be laughed out of town by Sam Allardyce, and if he complained about the hand he has been dealt! Bilic has a squad at his disposal that Sam Allardyce could only have dreamed of, during his tenure as manager of The Club. He would have the squad organised and playing good football! Yes football was dire under Big Sam at times, but make no mistake, it’s been just as bad if not worse under Bilic. The big difference being, the quality of player at Sam’s disposal, has been far inferior to what Bilic has had. Whether one likes it or not that is a fact. Big Sam would have the likes Ayew, Arnautovic, Hernandez, playing at the top of their game. It would have been a happy and motivated squad, a squad that knew exactly what they were doing and what was expected of them individually.

Given quality players, Allardyce will give you any style of football you want. Speak to Sunderland and Palace fans, they will confirm that. Wilfred Zaha, the talented but enigmatic Crystal Palace winger, admits that he enjoyed and played his best football under Big Sam. He would have made the likes of Lanzini an even better player. One of the great myths spouted about Allardyce, is that he does not like flair players, and wouldn’t have been able to attract big name players to the squad. Well you don’t attract the likes of Okocha, Djorkaeff, Campo, and Anelka if you are a crap manager. Those are quality players, whom Sam Allardyce got the very best out of. I’m afraid if I was having a party, Slaven, Jack Daniels and Guns n Roses would be the one, however if I had a choice between the two to manage my football club. It’s Sam Allardyce who would have been by choice. Hindsight is a wonderful thing, moving to The London Stadium was never going to take The Club instantly to the ‘next’ level. How could it? When the majority shareholder, David Sullivan has liquid assets of roughly £500m.

It was always going to take time for the extra revenue, created from the move to The London Stadium to kick in. It’s going to take steady growth, as more money becomes available we will be able to attract a better class of player. Which will see us climb the table. We may not have landed all our transfer targets, no Club does. But we have should be far higher up the table than we are. The buck stops with the manager. I just cannot see things improving long term under Slaven Bilic, we may win a few on the bounce. But it will always be a case of two steps forward, and three steps back under the likeable Croatian. Whether it is now or the end of the season, The Board is going to have to appoint a new manager. It is going to be a hugely important appointment, we will have spent two years at The London Stadium, and should be ready to compete with some of the bigger clubs. I just hope they ignore social media, that also lead to a lot of negative opinion regards Allardyce for starters. Poll after poll: Should The Manager stay or go. People with agendas. Negativity on the internet spreads like cancer believe you me. I have said it once and will say it again. Forget Rafa and the rest as manager! Brendan Rodgers would be a perfect fit as West Ham manager. Big Sam? He would be looking at the youth we have coming through and our squad, sigh and think: if only. Enjoy the game tomorrow! Remember to take your seat early. The Board are having a minute’s applause for Hugh Hefner! Only kidding 😊!