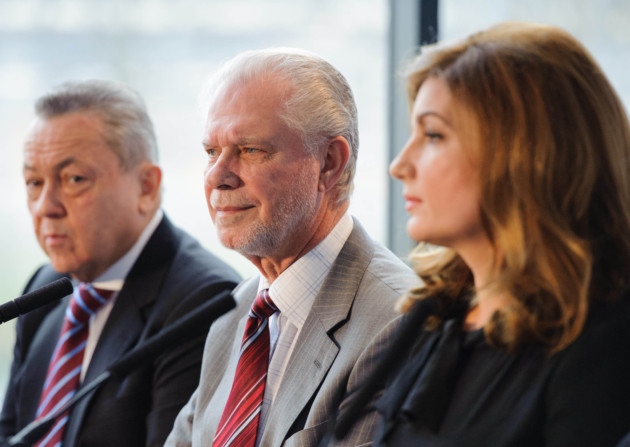 Amid all the talk around our form, league position and Slav’s future, a rather interesting week off the field seems to have almost slipped by.

The 10% of the club that was still owned by the Icelandic connection was sold to a very rich American by the name of J. Albert (Tripp) Smith – no, I had never heard of him either. A bit of research , well google search, showed that he is a Senior Managing Director of Blackstone, an investment capital operation that bought the company, GSO, that Tripp and two colleagues formed and grew.

This seems to have made relatively small waves so far, which is odd in itself. Blackstone are big players, handling Billions of Dollars’ worth of investments for their clients and themselves.  Apparently Tripp has invested independently rather than as part of Blackstone, however it seems unlikely that this is the result of some sudden sentimental fondness for football in general or West Ham in particular. Although it is stated he has no plans to increase his holding, GSO’s modus operandi has been to invest themselves in organisations they recommend to their clients, I suspect there is more going on here than anyone is saying. That may be a good or bad thing. On the surface, access to Billions could be very exciting, however these guys are in the process of making money, that is not necessarily bad for the club as they would want to build the brand but I guess we will have to wait and see.

So will Gold and Sullivan sell? I know they claim they intend to keep it in the family but –  well, they would say that wouldn’t they! David Gold’s daughters have their own business interests and the Sullivan boys are a long way off being ready to run a premier league club. I have always believed that is the plan, build the value of the club and sell on, maybe keeping a seat on the board in the process if possible.  What about the timing though? Well I started this thought process adding 2 and 2 and making 5, looking at a possible combination of events. I read that the penalty clauses for selling the club (following stadium move) last five years, I was wrong – it is nearly ten. The five years tied in with the other news of the week. Birmingham looks set to be awarded the commonwealth games for 2022. So how does that affect West Ham? Well they are going to upgrade the athletics stadium in Birmingham into a shiny new  50,000 seater arena which would reduce to 25,000 after the games.

With the Olympics not due back for a generation and the world’s having been in London this year it will be some time before another  major games is in the UK, the prohibitive cost of transforming the London Stadium and West Ham’s right to influence dates would leave the Birmingham stadium ideally placed to be UK Athletics preferred home.

I initially though the Commonwealth dates tied in to the penalty clauses but was wrong! What my searching did tell me though is that the clauses are not that spiteful; especially as the formula to be used factors in debt. The more debt, the lower the penalties; which would go a long way to explain the model of loans from the directors to the club. The interest they are recouping would offset the penalties. A 350 million pound sale would mean around 19 million in penalty clauses paid to the public purse, 95 million debt to be paid off (Mostly to Gold and Sullivan) would leave 265 million for Gold and Sullivan – a profit of around £130 million over what they have paid for shares so far (source City AM.com) – so the figures work for them!

That is not to say that the Commonwealth games are not relevant. A new home for Athletics would clear the way for the stadium to be sold to West Ham. Money could be recouped to the taxpayer, Athletics would have its own stadium and the London Stadium could be reworked into a permanent football ground.

All of this makes West Ham extremely attractive to potential US investors already well aware of the Premier League brand. London is one of the most important cities in the world; hence the board being so keen to promote the London name and the Premier League is the biggest brand in football.

This is not meant to knock Gold and Sullivan, they are not perfect but those of us that have long felt West Ham are a potentially much bigger club than they have ever demonstrated are vindicated by Gold and Sullivan being able to sell 52000 season tickets. That combined with the potential of owning the stadium which sits a couple of miles from one of the centres of world finance makes West Ham, as I have said, quite an attractive prospect.

For me, and I could be way off, a lot of things fall into place. The debt model, the relative recent silence from the board and the reduction in squad size; this coupled with caution with funds at a time when it should be freeing up and the procrastination around Bilic’s position. Are they at the beginning of moves to sell up? I could be wrong as I say but I believe this recent acquisition of 10% is the precursor to a take-over. We shall see.