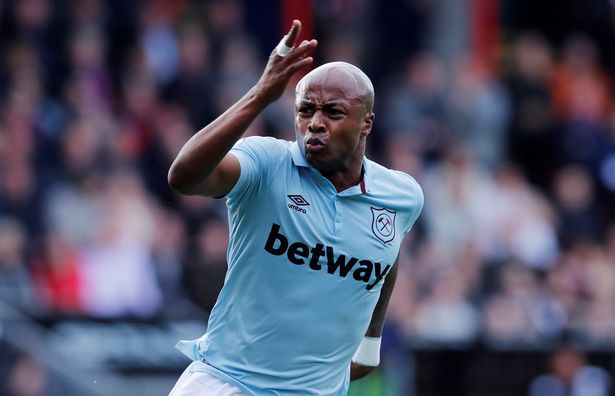 Today West Ham drew even with Crystal Palace 2-2 late, in heartbreaking fashion as Wilfried Zaha scored the final goal in the 96th minute of play.  The day began with promise for the Hammers who resumed their Premier League campaign after a surprising League Cup victory over Tottenham earlier in the week.  Both Palace and West Ham have had disappointing starts to their year, and both sides were sorely in need of a victory to improve their position on the league table.

Midway through the opening half, it was West Ham who earned their way to the score sheet first.  After some tight play in Palace penalty area it was Aaron Cresswell doing what he does best and perfectly crossing from the left side to Javier Hernandez who easily finished.

A few moments later it was Joe Hart earning his wages for the day blocking a very close header from James Tomkins.  In the first half Hart showed great poise under attack.  But the next goal came from the visiting club again as Andre Ayew took the ball on a long counter attack, sidestepped the defense and cracked a long range 25 yard strike into the net.

By halftime, West Ham had a commanding 2-0 lead and all of the momentum.  Cresswell was replaced during the break by Arthur Masuaku after Cresswell showed some discomfort in the closing minutes of the half.

Early in the second half, the Eagles found their own lifeline as Angelo Ogbonna clumsily brought down Andros Townsend in the box and Luka Milivojevic easily converted the penalty kick to bring Crystal Palace back into the match.  Unfortunately for West Ham it was their fourth and league leading penalty kick earned this early season.  (All four have been converted to goals).

Moments later the West Ham supporters who traveled to Selhust Park almost gasped as Yohan Cabaye had a strong strike on goal.  Once again the post saved West Ham from surrendering the equaliser.

In the 80th minute Palace was awarded a free kick just outside the penalty area.  With a strong attempt, Cabaye almost had the goal if not for the acrobatic save of Joe Hart who punched it wide.

Playing behind the ball for much of the final moments, Palace mustered one last attack in the waning seconds of the match and it was Wilfried Zaha coming open from a defending Michail Antonio, who scored the needed goal basically in the final second of play.

After such a promising week with the Cup victory at Wembley, this defeat hurts.  If West Ham can’t secure three points against the bottom of the table, who will they fare in December when they play much of the top of the league?  It has long been rumoured and reported in London sports media that Bilic had two games prevent his sacking.  Only the board can know what these results mean for the embattled manager.

For West Ham, the road doesn’t get easier as next week they host Liverpool, who are coming off a 3-0 victory over Huddersfield.  Whether the club and the fans can bring some Boleyn magic to the London Stadium next weekend, will be a very important question.

Please check out TheWestHamWay.co.uk all week for any breaking news regarding the coaching status or injury updates for the team.