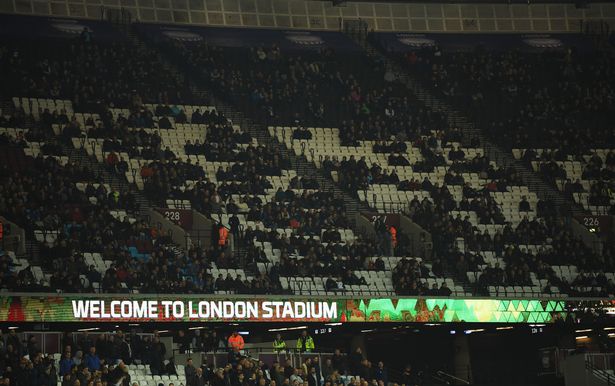 West Ham lost this evening 1-4 to Liverpool in what many speculate could be Slaven Bilic’s final match as West Ham manager.   Poor defending of Liverpool’s lightning fast counter attacks and a sizeable portion of the West Ham back four out with injury or suspension was too much for a relegation-threatened side trying to save their gaffer.

In the early going, West Ham played with some enthusiasm and hoped to reward the nearly full London Stadium crowd with a positive result.  In fact, Andre Ayew almost opened up the scoring for the home crowd with an early one-on-one with Simon Mignolet that went off the nearside post.    But the first actual goal was to Mohamed Salah who joined Sadio Mané on a quick counter after an unsuccessful West Ham cornerkick.  Aaron Cresswell found himself in a two on one situation as Mane played to Salah who slotted in, out of Joe Hart’s reach.

Less than two minutes later Liverpool found some success on their own cornerkick attempt as it deflected off of Mark Noble but was unable to be gathered by Hart and Joël Matip quickly tapped it in for the second goal in 90 seconds.

For the second half Slaven Bilic sought more attacking options and pulled Fernandes for Andy Carroll.  Having Chicharito, Ayew, and Carroll all on at once did make West Ham more dangerous and for the first moments of the second half, it looked as if the Hammers could climb back into the match, as they had at Wembley last month.  Barely ten minutes into the half Manuel Lanzini did get West Ham on the score sheet with a talented finish as he chested a cross and volleyed into goal.

With the stadium crowd on their feet and the bubbles in the air, a great comeback was quickly averted as Alex Oxlade-Chamberlain scored almost immediately after the teams reset for kickoff.   While West Ham tried to get back into the match, a 75th minute goal from Salah, his second of the day, sealed the Hammer’s fate, and possibly Slaven Bilic’s as well.

The final moments featured West Ham slowly building their attack while Liverpool would respond with a speedy counter that usually had the Claret defenders on their back foot and Hart diving in to the turf.

A disappointing evening for West Ham, and after Sunday’s matches this team could fall into the bottom three of the table.  Whether the board makes a coaching change this weekend or Bilic is allowed to survive through the international break, this isn’t what supporters on the East End had in mind after a seventh place finish two seasons ago, and a move to a much larger stadium.   At the very least, the recovery of notable defenders should help stabilize the situation, as West Ham surrenders more goals than any other club in the league.

There should be more news over the next few days regarding the future of this club, as always check TheWestHamWay.co.uk for the latest and most accurate reporting as we wait for word from the board on the future of Bilic and his staff.