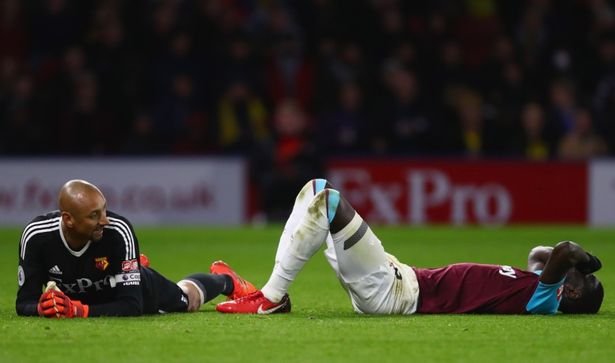 The change of management in the technical area did not change West Ham’s futility during the current Premier League campaign.  The Hammers suffered a 2-0 defeat during their Sunday visit to Hertfordshire.  With the loss, West Ham remains firmly in the relegation zone.

The story could not be more different for the Hornets, who, while not a historical power in England’s top flight of football, find themselves playing entertaining football and enjoying time in the top ten of the table.  For Watford, their biggest concern might be hanging on to their manager, with Everton prepared to splash some money his way.

For the day’s match, it was a chilly day but the travelling West Ham supporters were a loud portion of the 20,018 in attendance.  Even when their side went down, they continued to encourage their players.

Watford’s scoring began in the opening half when Will Hughes took Andre Gray’s deflection and easily scored just inside the far post.  West Ham had multiple opportunities to level the match before the break.  Both Marko Arnautovic and Cheikhou Kouyaté had remarkable opportunities they were unable to convert, through poor shot selection or great play by Heurelho Gomes.  The Brazillian goalkeeper had great moments, and kept the clean sheet for the match.

During the break, David Moyes replaced Andy Carroll with Diafra Sakho, in hopes of finding a bit more pace on the attack, however, the opening twenty minutes of the second half saw the match almost entirely played in the West Ham penalty area.  There were no counter attacks or even much movement beyond midfield as Watford was very technical and precision-like in maintaining possession against an outmatched Hammers side.

Predictably the home club was able to find their second goal during this period as Will Hughes played through to Richarlison, who had an unimpeded run to the goal.  While Hughes had inadvertently handled the ball with his hand, Andre Marriner didn’t feel it was significant enough to whistle him for the handball.  Richarlison’s goal stood, and Watford had a comfortable lead for the remainder of the match.

West Ham’s setbacks didn’t end with the score sheet as late in the match,  Marko Arnautovic suffered a serious thumb injury that looked to be very painful.  The West Ham record-signing was taken off the field and no word on his recovery time will be given until later in the week.

With injuries and stoppage of play, Marriner awarded eight minutes of added time to the match, but West Ham was unable to maintain much possession and never mounted much of a threat to Watford’s clean sheet.  The final whistle meant that West Ham was firmly in 17th place on the table, and has a lot of work to do before May if they want to remain in the Premier League.

This is such a dangerous time for West Ham.  Devoid of much attacking creativity, and playing much of the matches behind the ball, Moyes will really have to find some ways to spark some scoring.  The schedule in December is brutal:  In 16 days West Ham plays at City, at home against Chelsea and Arsenal, at Stoke, and then a League Cup tie at Arsenal all in a period of 16 days.

If West Ham hopes to stave off relegation, they will need to find some points in that challenging run of matches.  Otherwise, this season is heading towards the Sky Bet Championship league very quickly.