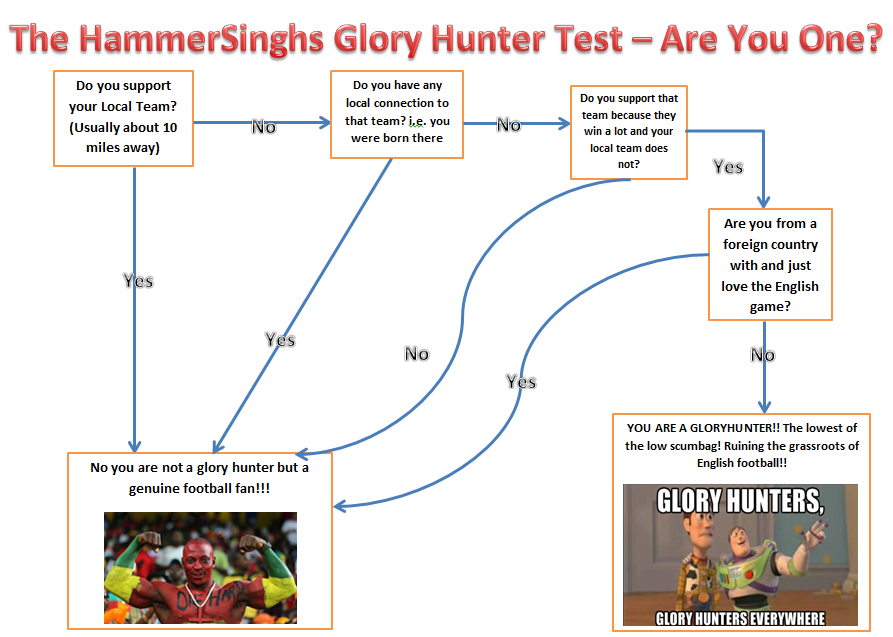 Football Affordability and the Gloryhunter Test

I was reading an article on the BBC website and it talked about how kids were being priced out of the game (Price of Football 2017: Young fans ‘need more help’ – Mark Hughes – http://www.bbc.co.uk/sport/football/42012985 ) in that they could not afford to go at watch “their” team!

Now I would like to know whoever commissioned this poll, were they talking about kids who were being priced out who support their local team, or those that go and watch teams far away, i.e. what we term as Gloryhunters! ?

I personally think, if we just interviewed fans who supported their local teams, with regards to affordability, I think the outcome would be different (apart from those gloryhunter teams). OK yes, football is more expensive today, but you can budget for it and I agree it could be more affordable.

I however , have a particular issue around “gloryhunter” teams. The gloryhunter teams seem to have forgotten the very basis from which football evolved in this country. The local identity.Your local team filled you with a sense of pride because it was YOUR local team. You knew the players, manager and staff and would often say hello to them walking down the street. How many of you lot remember saying hello to Trevor Brooking and John Lyall when they were filling their cars at the petrol station (now gone), on Barking Road. They were like family members. Can a gloryhunter say that about his/her team?

I would argue the real issue that is bad for the game is gloryhunting (see why further down below).

Those of you who know HammerSinghs on facebook, will know of our long running feud with gloryhunters (usual suspects Man United, Chelsea and Liverpool come to mind) who troll us on our facebook page. Many of them claim not to be gloryhunters, and many criticised West Ham fans that were not from London/Essex.

Why are Glory Hunters bad for the game?

Firstly let’s define a glory hunter (see the graph). Gloryhunters support teams usually hundreds of miles away, they have no connection with the area, and they support that team purely because they win a lot. So why is that bad?

1) It takes money out of the local economy and the club – usually deprived working-class areas.
2) Less money locally means the club invests less.
3) Less investment means less scouting, less training grounds and ancillary facilities.
4) Less scouting, less training means less talent is discovered.
5) Less talent being discovered means is not only bad locally but bad for our national team.
6) Less training and facilities means working class kids get less opportunities.
7) Football training and facilities gives discipline to local kids. Even those who do not become professionals get ancillary jobs e.g. physio’s, security, admin, even professions like accountancy.
8) The training associated with football creates a good discipline and promotes healthy living.
9) It puts money into the pockets usually of foreign oligarchs who sap money out of the UK.
10) It creates fickle fans – as soon as a team stops winning, these fans change loyalty and the subsequent loss of revenue could be catastrophic.

All this besides, the bedrock of English football has been based on a local identity (as I stated above), where a football team was usually based around a factory, club etc was formed to give a sense of unity and pride and something to look forward to for the average working person on the weekend. Win or lose you followed your local team. How can someone who has loyalty to a team hundreds of miles away claim to have that same identity? OK I can understand why people from a foreign country may admire particular teams but gloryhunting on the other hand is a form of insanity, it makes football into a weird sort of X-factor. That creates fickle fans. I don’t buy this crap, that “we’re not glory hunters because we travel 200 miles to watch our team”. That makes you a glory hunter with more money than sense.