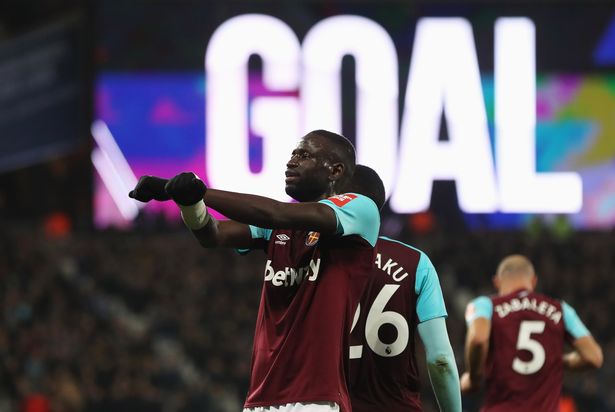 West Ham drew tonight 1-1 to Leicester City in a Friday night premier league fixture that featured a spirited home crowd and a bit more passion from the stands of the London Stadium than recent matches have shown.  For Claude Puel , he like David Moyes, is still finding his path with his first team players.  But with proven scorers like Jamie Vardy, the Foxes have shown they are able to score quickly.

In the early going on Leicester’s first real counter attack, Vardy crossed to a poorly defended Marc Albrighton, who found the corner of the net.  While Vardy showed his usual pace, it was the poor communication from centre backs that allowed Albrighton the space to open up the scoring.

Following the opening goal, West Ham seemed to regroup and carried a slight advantage in possession throughout the opening half.  Desperately needing an equaliser , Andy Carroll tried his best to play his role of target man.  Crosses from Cresswell and Arnautovic were close but not quite there for the tall striker.

Finally, in the final minute of the half, a West Ham corner kick allowed Cheikhou Kouyate muscle through Wilfred Ndidi and get a header past Kasper Schmeichel (the header actually rolled off of Danny Simpson’s back, and into the goal). But West Ham went level and found some momentum heading into the break.

The second half was spirited but neither goalkeeper was under much duress for most of the half.  The fans at the London Stadium really came to life in the second half to encourage their struggling side on to a sorely needed victory.  The most notable point of the second half was the number of game stoppages due to injury on both sides of the pitch.

In the final moments of the half and the six minutes of added time, it was West Ham showing the most ambition in taking all three points, however the Hammers were unable to find a clean shot and Leicester showed some fortitude in defending Lanzini’s set plays.  The closest attempt was a stoppage time corner kick which featured an Andre Ayew overhead kick in heavy traffic which sailed over the crossbar.

It wasn’t lack of effort towards the end, but Martin Atkinson’s whistle ended West Ham’s chances at victory and Moyes had to settle for a single point for all of the effort.  The story to follow after this match is the medical status of Arnautovic, and Kouyate.  Both picked up injuries, although only Arnautovic left the match.

It is a short week for West Ham as they travel to Goodison Park to face a struggling Everton side, still without a new manager.    Coming off their 1-5 Europa league embarrassment, the Toffees will be seeking some redemption and both clubs desperately need a victory.

Be sure to stay tuned to TheWestHamWay for all your information on Wednesday’s match.