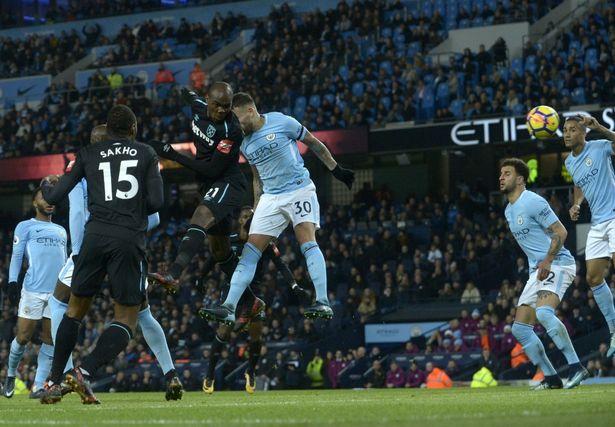 Manchester City overcame an Angelo Ogbonna first half goal to continue their reign at the top of the Premier League table.  With the loss, West Ham is still in dangerous territory with some challenging matches to come.

David Moyes opened the match with five defenders including 18 year old Declan Rice, who played a competent shift against the world class competition.  Adrian started the match in goal due to Joe Hart’s loan status.  The most interesting adjustment Moyes made was placing Michael Antonio in at forward.  With Andy Carroll injured, this gave the Hammers somewhat of a target man, but with the possession deficit, there weren’t many opportunities.

Given the slow starts West Ham has seen this season, going well into the end of the opening half with a clean sheet was a welcome surprise for the many West Ham supporters who braved the cold (and the train delays out of London) to attend the Sunday evening match.  The Citizens maintained an overwhelming possession advantage but West Ham defended well, and Adrian was class.  As the half ended, West Ham’s fortunes turned on a Manuel Lanzini corner kick which Ogbonna rose above his defenders and headed it inside the far post.

Taking a deficit into the break for only the third league match of the season, City brought on Gabriel Jesus to add more pace to the attack.  While Pablo Zabaleta anchored a spirited defense against his former club, finally the sheer number of opportunities caught up with West Ham and Nicolás Otamendi picked up a pass from Jesus and scored from short range, early in the second half.

While the Hammers tried to keep behind the ball to secure the away point, a David Silva tap in from a well-placed cross from Kevin de Bruyne gave the home club their needed margin with only seven minutes remaining.  Rice, played well, but Silva was able to score the winner due to not tightly marking the Spanish national.

For West Ham, their final opportunity to go level was during the added time when Marco Arnautovic sprung free on a counter attack and crossed to Diafra Sakho in the middle of the City penalty area.  Sakho’s strike was wide right of the post and that chance turned out to be West Ham’s final gasp to grab any points from the match.

Takeaways from this match primarily will be whether Moyes has a real goalkeeper battle on his hands.  England’s number one hasn’t looked as strong lately as Adrian did today.  Also, Kouyate and Antonio picked up injuries during the match.  Their status will be important as Chelsea visits the London Stadium Saturday afternoon.

West Ham is firmly in the bottom three.  With the poor goal difference, it will take more than a surprise victory over Chelsea to pull them to safety.  Today’s showing was much better than the 6-0 defeat that the odds makers predicted; however with the Hammer’s current position there isn’t time for moral victories.  West Ham needs some wins quickly.