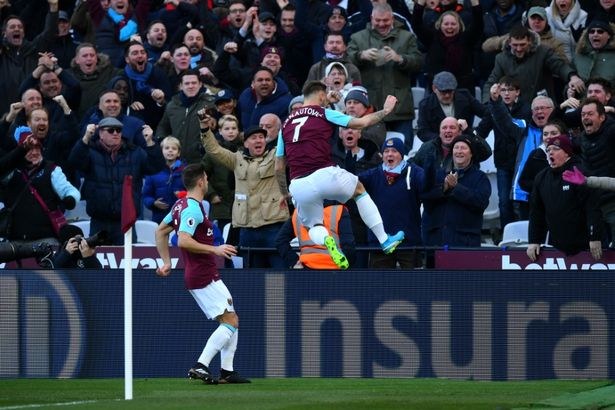 Christmas came early for West Ham’s downtrodden supporters today as the Hammers took three points from the defending league champions in a 1-0 London derby against Chelsea at the London Stadium.  The lone goal, from Marko Arnautovic, happened early on and was the West Ham record signing’s first goal in claret.  The remaining 85 minutes of play were nerve racking for a near capacity crowd almost conditioned to watch their club surrender goals late in the match.  But on this cold East London day, a mixture of smart defending and crisp ball movement gave the hosts their first league victory since September.

The goal came in the 7th minute when Manuel Lanzini found Arnautovic at short range.  The Austrian was able to fight off two defenders to get a shot across the goal, well away from Courtois’ reach.  With the early goal, the London Stadium established a more festive atmosphere.

Adrian, making a second start after his solid showing against Manchester City, had an active afternoon, blocking early shots from Kante and Zappacosta.  The entire back line for West Ham put in a great 90 minutes both preserving the clean sheet and also not giving up the foolish penalties in the box, which had doomed them in previous outings.

Once again, Moyes began with Michael Antonio in the forward position.  While Antonio had his opportunities, by the second half he was truly “out of steam” and Andre Ayew was brought on.  Ayew actually suffered what appeared to be a hamstring injury only minutes after he entered the match.  His pace was definitely affected; however he did finish out the match.

By the final 15 minutes of play, West Ham devolved into a purely defensive squad. All eleven players were behind the ball and no real attacking threat on their minds other than a few Diafra Sakho counter attacks that were short lived.

Despite the five added minutes and a swath of bookings (six West Ham players found their way to Anthony Taylor’s book, and Stuart Pierce was almost ejected for launching the ball into the stands as it rolled through the technical area) but the hosts were able to find that elusive win versus a top six club in the London Stadium.

Hopefully this momentum will carry forward as West Ham will see Arsenal on Wednesday and finish the week with a visit to Stoke.  The Gunners have been on a good run as of late both in the Premier League and the Europa League, and will still come to East London as the favourites.  West Ham sit one point from safety.  If the Hammers can play the next two like the last two, then 2018 could be a much less depressing year than West Ham’s supporters had feared.