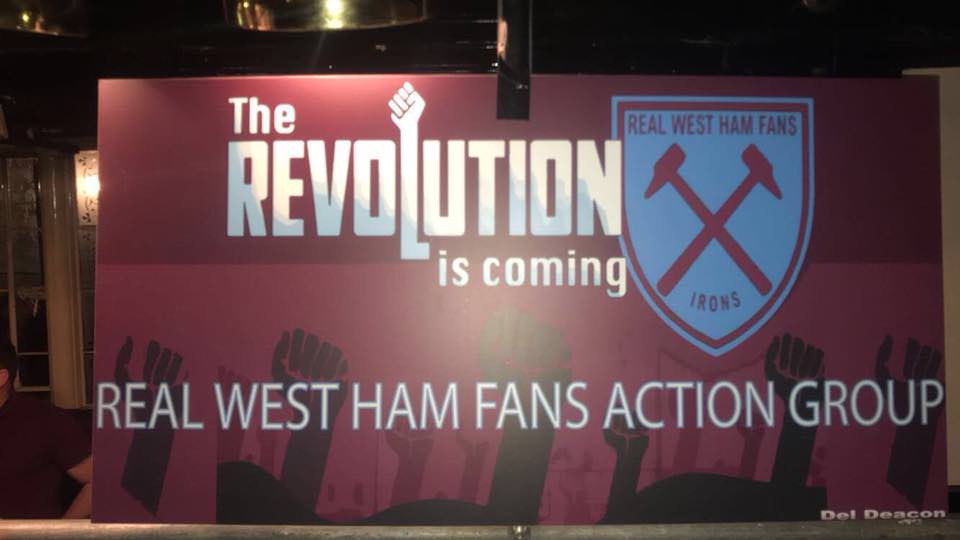 We are exactly what our title says we are, The Real West Ham Fans Action Group and we are here because we are sick of how the club is being run. We want change and we are not stopping until we get the changes the fans want, deserve and need. We left our home with a lot of promises being made, a lot of which have not been lived up to. We can go on and on about the things promised but most of you know what they were. When we moved to the London Stadium a lot of fans were on such a high following the final year at the Boleyn Ground that we lost track of what really is happening and what exactly is going on at our great club. Many thought the day we left Upton Park would never come but it has and many now wish that it never happened.

Why did we form and who formed us?

The reason we formed is because, as stated above, we want change and we want our club back. We feel that as fans, we do not get the respect from the board that we deserve. We want to watch football inside a football stadium, not an athletics stadium. We have been branded as ‘customers’ over and over again when all we are is passionate and loyal supporters who just want the very best for the club. The action group was formed by Andy Swallow, Bill Gardner, Micky Morgan and ‘Moose’ (not Ian Abrahams from Talksport radio!): Four of the most passionate and loyal supports you could want at your club. Since then we have been joined by Paul Laws who will be looking at the provisions that the club make for disabled and elderly supporters as we do not feel that these are currently of a sufficient standard. We have also been joined by Harry Hamilton who will provide a voice for the younger generation of supporters as they are the future of our club and we value their views just as much as anyone else’s. We feel that it is important to reiterate that the Action Group is not in any way associated to the ICF or FLA. We are our own group simply looking to make things happen for the benefit of West Ham supporters.

When were we formed?

We formed in the last two to three weeks and the ever-growing support we have received on Facebook and Twitter has been fantastic so we would like to thank everyone for their support and offers to help out as and when they can. We have gone from strength to strength and we intend keep growing and growing: This is just the beginning. We will keep pushing for change and once we are satisfied with the changes that have been made we intend to keep the group going as a voice for the fans to get any problems we may face ironed out nice and quickly.

The balloon protest has been called off as confirmed by Andy Swallow on the live video on Friday night. The suggestion was originally made as it was felt that it would be a visible demonstration of how many fans are unhappy with the way that the club is being run: Not a small group of fans, but thousands of individuals. We decided to use black balloons as the colour signifies to the board that we as fans feel that the club has died. We selected the Newcastle game as we felt it would give us time to spread the word and get our name out there to fans who do not use social media and do not know who we are or what we are here for and give them a chance to show their frustration and voice their opinion. However, we have since decided to call of the protest as we feel that we will need more time to get the word out. An announcement about the first plan of action will be made soon.

Harry Hamilton: Why I decided to get involved

When I was growing up the thing I always loved being told was that I was to going West Ham on Saturday with my Dad. It meant everything to me. Getting off the tube at Upton Park, walking down Green Street and smelling the freshly-cooked burgers, walking past the bakery outside the station, hearing ‘Bubbles’ ring around the Queens, nothing ever made me happier. Now my Dad, like a lot of people, is hating it at the new stadium, finding it a chore and has effectively been priced out. This is the case for numerous supporters. There are no concession prices for ‘Category A’ games: All tickets are priced at between £50 and £80. When travel, food and drink are included parents are looking at a bill of between £250 and £300 simply to take their children to watch a game of football. Many people cannot afford that. When we moved stadium, a big promise made by the club was the provision of ‘affordable football’. This clearly is not the case: Another lie, another broken promise.

Another thing that has saddened many supporters has been the disappearance of the vendors who used to operate on Green Street: The scarves, hats and badges, the burger vans and the ‘two for a pound’ sweet stall. These are people who fans had made friends with over the years. All of these businesses were told they would receive help moving to the new stadium: No-one would be left behind. So, where are they? None of them were given the chance to make the move; in their place we have much more expensive, high street brands. A burger and chips, for example, now costs £9. It is because of things like this that I got involved.

During our meeting at the Boleyn pub on Monday numerous people told us that, like my Dad, they now found going to watch West Ham a chore. Many said they simply could not be bothered with the hassle because the club no longer feels like West Ham. Hearing this hurt me: If the parents and grandparents cannot be bothered anymore or find it a chore, what chance do the younger generation have? The last thing the club needs is to be abandoned by the younger generation in favour of other clubs. Without the fans, we have no club. I cannot wait for the day I have a child of my own and I can take them to watch West Ham but at the moment I do not think I would want to. This is not the West Ham I want my child growing up knowing. I grew up loving West Ham not because we were an amazing team on the pitch – let’s be honest, we never have been – I fell in love with this club because of the fans, the ground and everything that came with it. Going into the Boleyn with my Dad and his mates was a brilliant experience and I always came out smiling having heard the songs and experienced the party atmosphere. To me, that was what it was all about and at the moment I have never felt so far away from the club, as have many other people I know who are of a similar age – and I am only 20 years old.

Some people will agree with us, others may not. One thing we all must remember is that everyone is entitled to their opinion, all of which must be respected. When all is said and done, we are still West Ham United and we all will always be united as one when we support the club.