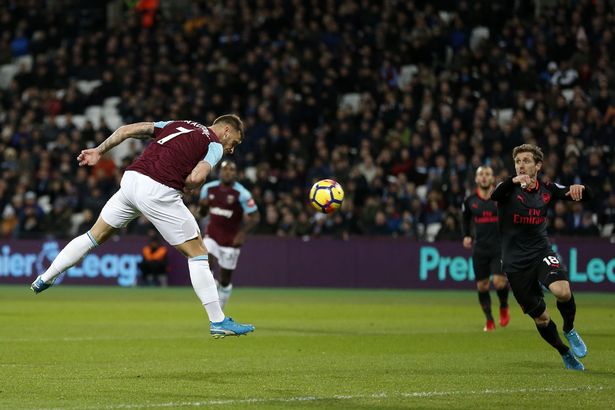 West Ham drew to Arsenal during a midweek December match at the London Stadium.  The hosts looked to build on their massive win over Chelsea over the weekend and a London derby against the Gunners served as a great opportunity to continue the momentum.   For Arsène Wenger’s side, they looked to get back to winning after a 1-1 draw at Southampton.

The first half opened with West Ham continuing their XI behind the ball strategy employed to finish the Chelsea match.  David Moyes kept an unchanged team sheet from the previous match, but as the half wore on West Ham took some chances on the attack.

The best opportunity was in the 14th minute as Marco Arnautovic headed a Arthur Masuaku cross into the net bet was flagged for being half a step offside and the goal was disallowed.

Adrian and the defenders did well, once again against the pace of Alexis Sanchez and the other Arsenal attackers.

The second half featured the Gunners maintaining possession and taking a number of off target shots on the West Ham goal.  A cold London rain also joined the match during the halftime break.  It was a mixture of luck and good goal keeping kept the match scoreless despite West Ham’s challenges keeping the ball.   For the entire match Arsenal held a 70%-30% advantage on possession.

Late in the match, Michael Antonio was showing similar exhaustion that he had over the weekend.  Moyes brought on Javier Hernandez, while Lacazette replaced Sanchez.   Bringing on Chicharito almost looked to pay immediate dividends as he took what appeared to be a game winning shot from 12 yards out, that trickled off the crossbar.  The entire London Stadium erupted before seeing that his strike hit the underside of the bar and was inches from giving West Ham a 90th minute game-winner.

After that disappointment, the hosts were able to close out the stoppage time and escape with a point.  Taking four points over a three match gauntlet of Manchester City/ Chelsea/ Arsenal is a feat that most West Ham fans would have agreed to given the poor play this club has displayed over the current season, however missing a couple of great chances despite an electric atmosphere at the London Stadium, it’s a tough pill to swallow.  Moyes and his team look to improve their scoring against a very struggling Stoke City side that was destroyed by Spurs over the weekend.  Mark Hughes is very much embattled and Arnautovic will return to his former club in great form.  While West Ham is level with safety on points, a good performance at Stoke can give the Hammer’s supporters some relief this Christmas.

For all the latest updates on team fitness and other news, please check out TheWestHamWay.co.uk all week long.