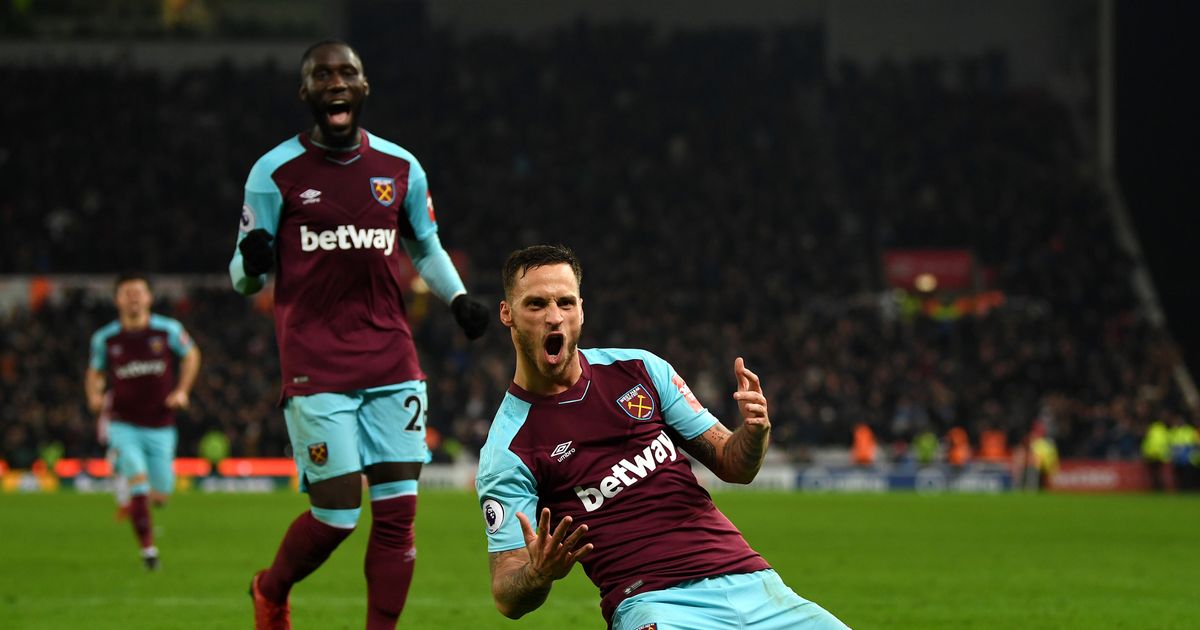 West Ham defeated Stoke City today in a delayed-start Premier League match at the Bet365 stadium.   The delay was due to a local power outage, but once play began, the Hammers continued their more aggressive ways and recent good form as they took the early lead.   In the 19th minute of play, Manuel Lanzini on a drive to goal was taken down in the penalty area, earning the Hammers a spot kick.  Mark Noble was able to connect and the visiting club took the 1-0 lead.

Fifteen minutes later, Noble picked up a knock and asked for a substitution, which brought on Declan Rice.

Prior to the half Marco Arnautovic had two chances to increase the score against his former club.  The first found a poor angle that aided Butland’s stop, and the second he took a well-played ball from Arthur Masuaku but his strike was well over the goal.

While the hosts began the second half with a renewed attacking spirit, once again West Ham were able to hold a third consecutive clean sheet as this defense, absent Winston Reid who is serving a suspension, held the Potters off.  The biggest story of the second half was Arnatovic’s missed opportunities.  The former Stoke man had multiple shots that either missed the goal or found the post.  The same could be said on the other side for Ryan Shawcross, who was unable to find his shot, despite numerous close calls.

Finally in the 75th minute of play, Arnautovic played the role of villain to the Stoke fans as he took the ball from a very crisp Lanzini and shot past Butland to extend the Hammer’s lead.    Arnie seemed to have fun with his return to Stoke as more than once he flashed the crossed hammers sign to the home supporters.  After his substitution he left straight for the tunnel, to avoid debris thrown from the home stands.

However, the home stands weren’t very formidable after Diafra Sakho took a masterful pass from Lanzini and slotted it into the far corner to give West Ham a 0-3 lead and a certain three points.  By the time Sakho scored the Hammer’s third, the ground was emptied except for the traveling West Ham supporters.

As the final time whistle sounded, it meant that West Ham was finally out of the bottom three and playing their busy December matches in great form under the leadership of David Moyes.  Both West Ham and Crystal Palace have seemed to reverse their fortunes under new managers, as both climbed to safety today.  East London fans will get a break from Premier League action as their club visits Arsenal for a League Cup tie on Tuesday and then West Ham have a three game series of very winnable Premier League matches, to finish the year.

Moyes has the fans believing, and Lanzini playing like his 2015-16 self.  He also has Arnautovic playing like a record-signing should.  Once Javier Hernandez returns to full health, and Antonio can survive a full 90 minutes, this team could be very dangerous for the final half of the season.