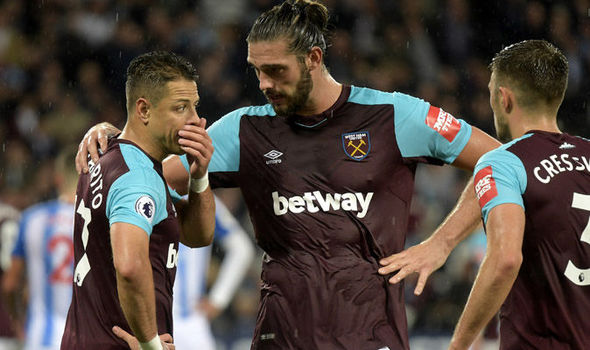 We have seen many variations of the ‘little and large’ striking partnership in the Premier League over the years, but is it time for West Ham to have one of their own? Can Javier Hernandez and Andy Carroll form a partnership that works, allows the club to play two up front and gives them more attacking options? Scoring less than a goal per game suggests that something needs to change, and perhaps it is time for Hernandez and Carroll to be given a long stretch playing together in the first team.

While West Ham’s team goal scoring has not been good enough through the first part of their season, neither has the strike rate of Hernandez and Carroll, so this does require a leap of faith. However, when you are in the bottom three and occupying a relegation spot because the start to the season has been so poor, it is time to start making drastic changes to rectify the problems.

The current league standings make for pretty uncomfortable reading if you are a West Ham fan, but that gap between the bottom and those in mid-table is certainly something they can close over the coming weeks. The festive period is a busy time for all football clubs, and if West Ham can perform during that period, they could make a rapid climb up the table.

Any number of clubs in the bottom half will think they can climb the table with a good couple of weeks, West Ham included. The latest Premier League betting has the Hammers at 15/2 to finish in the top half, something which may seem a long way off right now, but a good run over their next few games and all that could change.

If they are to go on a good run then the one thing that must change is their goal scoring. Playing Andy Carroll as a target man, with Javier Hernandez making runs off him, looks to be a realistic proposition and one that should be explored by West Ham. While Carroll will never contribute hugely on the goalscoring front, he can help others and if that means more service for Hernandez then that can only be a good thing for the club.

When at Manchester United, Hernandez never really had the opportunity to stay in the first team for a long period, but despite that, he had three seasons where he scored double-figure Premier League goals. Add to that his Bundesliga record in recent seasons, and it is clear he knows where the back of the net is, and will put the opportunities away when given them. The key to Hernandez is service, and Carroll could be the one to unlock the door and provide him with that.

West Ham are looking for ways to improve and playing Andy Carroll alongside Javier Hernandez could be the next method they try. Carroll won’t provide them with many goals, but his service to Hernandez could be what propels them up the league table and towards safety.