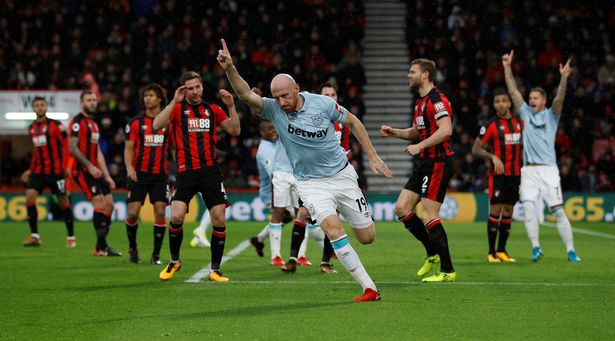 West Ham drew even to Bournemouth 3-3 on a Boxing Day Premier League fixture as both teams desperately looked to grab points during dual disappointing 2017-18 campaigns.

For the visiting Hammers they hit the score sheet early as James Collins scored on an Aaron Cresswell corner.  His powerful header went past Asmir Begovic to open the scoring, and give the struggling Hammers a lift.

During the opening half, both sides had multiple chances.  For the hosts, Callum Wilson played a smart ball into Joshua King, but his shot was wide.  Moments later, Arthur Masuaku set up Andre Ayew, who also fired wide.

Finally, the Cherries found their first half equaliser off a Ryan Fraser set piece, and it was Dan Gosling who was able to power it home.  Now the home stadium crowd was looking for the win, and despite some disjointed defending from West Ham’s back line, they were able to hold the 1-1 score until the break.

David Moyes left the team unchanged as the second half opened but the 1-1 score didn’t hold for long.  In the 56th Lewis Cook crossed into the box and Nathan Ake was able to tap it in from close range.  With the 2-1 lead, Bournemouth looked for another, as Gosling took on Cresswell and a good near-post save by Adrian kept the score at 2-1.

Looking for additional scoring options, Moyes brought on Andy Carroll and Javier Hernandez for Ayew and Obiang and West Ham’s attack did look a bit better.  A bit of Christmas good fortune helped as in the 81st Begovic lost his footing and fell, giving Marco Arnautovic an open goal for an easy tap in.   No one in the ground felt that things would finish 2-2, on a rainy evening at the Vitality Stadium.

And in the final minute of regulation, it was Masuaku who misdirected Francis, played into Hernandez, whose shot was blocked by Begovic straight into the play of Arnautovic, who once again tapped in and he put his new club up 2-3.  Now the traveling Hammers fans were feeling great after a horrible night of defending, it appeared they might leave with all three points.

However in the first minute of added time, Ake’s headed was guided in by Callum Wilson who apparently scored the equaliser from what appeared to be an offside position, and possibly using his hand in the process.  After a brief discussion with the assistant referee, Bobby Madley awarded Bournemouth the goal.

As the final whistle sounded, West Ham walked off the pitch with only a point, despite a remarkable comeback.  The anger of their supporters and team regarding the officiating will be long discussed.  Numerous challenges were missed during this match, and the final goal looked to be offsides.  It will be interesting see if the Premier League comments on the situation.

For West Ham, they cannot wallow in sorrow for long, as the New Year brings on a busy schedule of matches, and West Ham will host West Bromwich on Tuesday and Thursday travel to Wembley to face Spurs.  Coming out of the past two matches with only a single point is devastating to this struggling club.  A win over West Brom will be vital to any chance the Hammers have of staying in the Premier League.

Keep checking TheWestHamWay.co.uk for all your latest January transfer news.