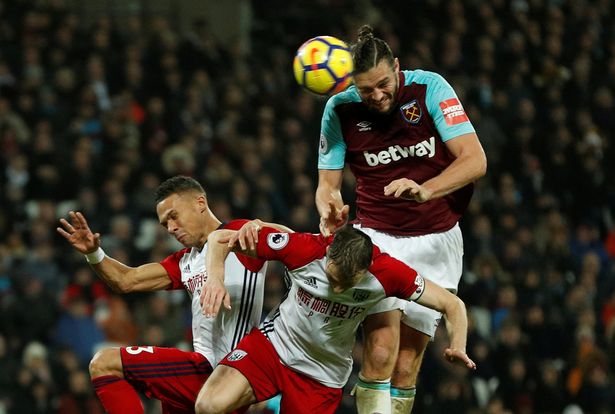 West Ham won today in their first Premier League match of 2018 to West Bromwich, as the Baggies were unable to take advantage of continuing lapses in defending on a rainy night in the London Stadium. But West Ham did have to come back from an early deficit and needed some stoppage time theatrics to bring a much needed win to the London Stadium supporters who braved the cold weather.

Early on in the opening half, West Ham really created some opportunities. The home club had the edge in possession and shots during the first half; however, it was some poor defending by West Ham’s central defenders that really put their side in early trouble.

In the 30th minute James McClean took the ball the length of the pitch and then struck his deflected shot looping over Adrian’s reach, to give the Baggies the early lead.

Both Manuel Lanzini and Marko Arnautouvic had chances, and Andy Carroll was largely ineffective in the opening half.  Adrian did have some well-played saves, but the half ended 0-1.

During the break David Moyes brought on Mark Noble to replace Pedro Obiang in midfield, perhaps hoping the captain could better organize a very disjointed-looking side.

In the second half, finally West Ham were able to muster a goal.  Aaron Cresswell, after some misses, finally had a great cross to Andy Carroll who headed it home.  To everyone’s relief, including Carroll, West Ham was now even.

Over the next 30 minutes both teams had their chances.  For West Brom, Ben Foster played very well, probably denying Lanzini on two sure goals, just by playing tough and showing smart positioning after Lanzini found open shots.

By the late minutes of the match, it just seemed that the fans and the players were going to will the home club to all three points. And finally late in stoppage time Arnautovic led a counter and crossed to Hernandez.  Arnie’s cross was off target and went behind Chicharito but charging down the right channel of the penalty box was Andy Carroll, whose short strike went past Ben Foster and gave West Ham the 2-1 victory.

After five months of openly wondering whether Andy Carroll’s role on this club had passed, the tall Geordie certainly earned his wage today.  History has shown either injury or a red card tends to keep Carroll from stringing together a good run of matches.  Hopefully, he can continue to contribute as West Ham have a brutal start to the first week of the new year.

The other enigma is Javier Hernandez.  Whether his relationship with Moyes is sour, or he’s still recovering from his international injury, Chicharito is too good a player to spend as much time on the bench as he has.  Possibly this quick turnaround against Spurs in two days will open up more playing time for Hernandez and Ayew and allow those players to show their worth to the team.

Hopefully West Ham can find better defensive structure before they face Harry Kane in Wembley.   It seems obvious that this relegation battle isn’t going to end anytime soon.  West Ham is a club in need of any points it can collect.  But the late game winner today certainly was a great way to begin a new year.