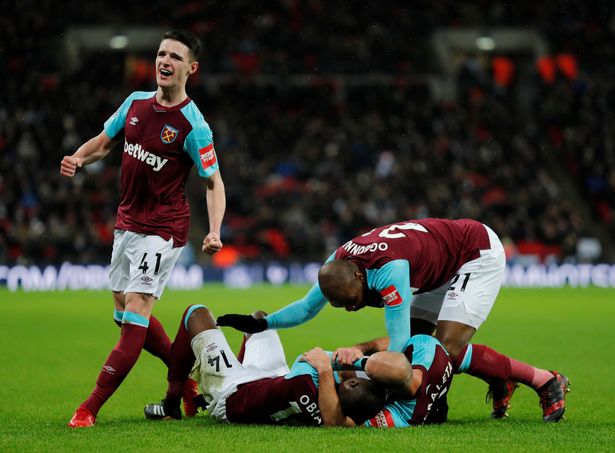 West Ham drew even with Tottenham tonight 1-1 in a Premier League match at Wembley.  Goals by Pedro Obiang and Son Hueng-Min were the sum of the action, as both West Ham and Spurs each played their second league match in 48 hours.  For the Hammers it was a chance to grow their narrow safe position in the table, albeit without their record signing Marko Arnautović, who apparently picked up an injury since the West Bromwich victory.

The first half was all Spurs except the visiting club decided to play ten men behind the ball, leaving Javier Hernandez with little service and not much help on the rare counter attack.    Tottenham had possession for two thirds of the opening half and had plenty of shots, but Adrian played masterfully with the likes of Dele Alli, Harry Kane, and Son all firing on him.  West Ham finished the opening half with no shots on goal.

The first half was so uneventful, without injury or substitution, that there was no added time. In fact, Mike Dean ended the half a bit before the 45’ mark.

No changes to either side during the break and play resumed with Tottenham still owning the edge on possession.   Early in the half, Chicharito did have a free run to goal after Davinson Sanchez errantly gave up possession but he was caught from behind before he could make a clean shot.

After going almost 70 minutes without a single shot on goal, West Ham’s fortunes changed rapidly. Pedro Obiang took possession well outside the penalty area and decided to take a distance crack at the goal.  His 30 yard strike was outside the reach of Hugo Lloris and in a shocker, West Ham were up 0-1 over Spurs.

For the next 14 minutes the Hammers resumed their play behind the ball.  Not to be outdone by Obiang, Son took a distance strike from the center of the pitch and also placed it just beyond Adrian’s grasp to give the hosts the equaliser.   As Manuel Lanzini had gone down to injury moments prior to the goal, David Moyes brought on Andy Carroll, to replace the Argentine.

Despite some frightening moments, West Ham were able to weather Tottenham’s assault over the four minutes of added time, and on a rainy night in London, West Ham walked off with a greatly-needed point.

It seems that Moyes has righted this ship somewhat.  The reports of Bilic’s fitness demands being soft were obviously not incorrect as West Ham would have lost this match three months ago by multiple goals.  Great marks to young Declan Rice, who started in place of the injured Aaron Cresswell tonight. The confidence exuded by this youngster facing the likes of Kane and Allie is very impressive.  Growing talent from the ranks of the U-23’s is a rare occurrence in today’s Premier League.  Hopefully the return of Reese Oxford will yield similar results in the coming months.

Speaking of U-23’s, what will the starting XI look like against Shrewsbury Town on Sunday night?  Given the injuries and the gauntlet of matches over the Christmas season, it is hard to suspect that Moyes will play too many of his usual first teamers.    Given West Ham’s position in the table, an early exit from the FA Cup might not be the worst fate that could happen; although a Premier League side losing to a League One club would be embarrassing, even coming off the heels of a great result at Wembley tonight.

As the January transfer window continues be sure to check out TheWestHamWay.co.uk for all the latest updates.  Ex will keep us all informed on who is coming, who is leaving, and where we are going next.