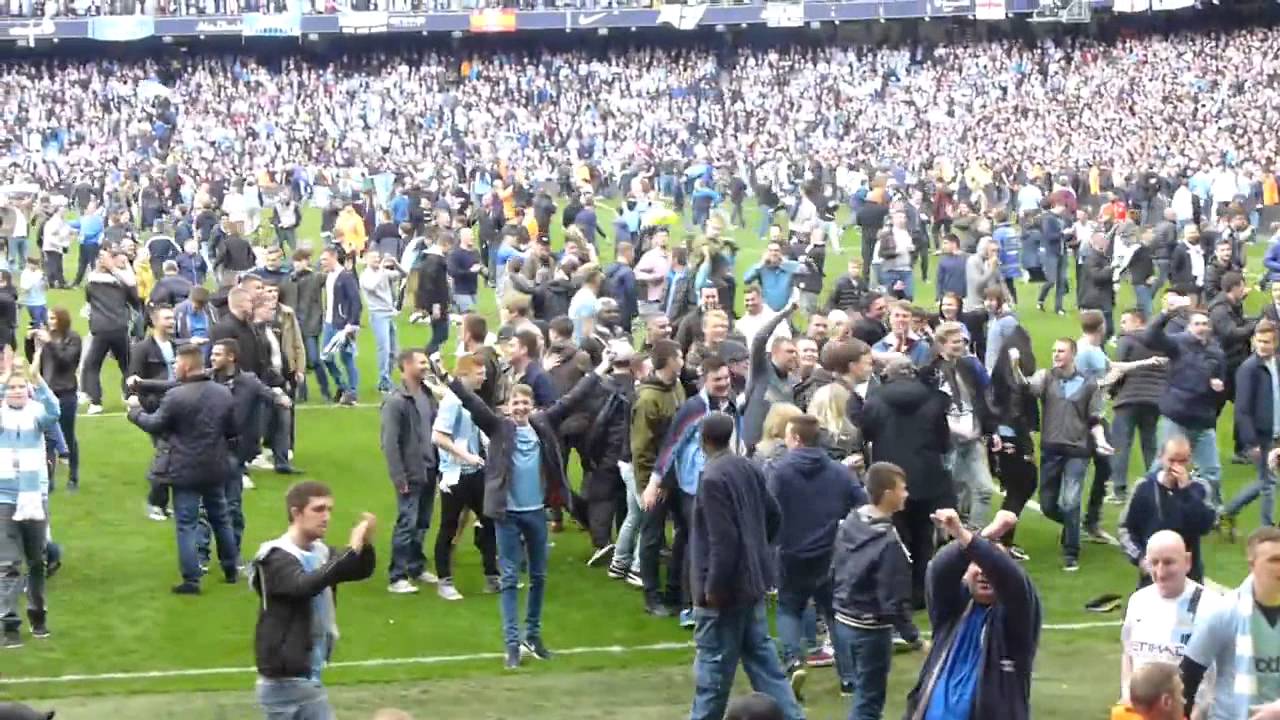 Manchester City are a football club that we’ve always had an ‘unofficial bond’ with. Their supporters are a carbon copy of our own; they’ve had the good times, mainly bad (up until the past decade), but they stuck with the club through thick and thin. Our mutual respect for each other stems back to 9th May, 1987, in a game where Manchester City had to beat us to avoid relegation in front of an 18,000 crowd at Upton Park. The final score ended 2-0 to West Ham, which inevitably sent City down into the old Division 2. Following a pitch invasion from the faithful was something what cemented this unwritten code between the two sets of supporters for life…

Hundreds of West Ham supporters approached the away end which caused a bit of a fright to policemen & stewards in the ground, only to witness an applause to the travelling supporters after their relegation was confirmed. “Bubbles” was chanted out by the City supporters, scarfs were swapped, and it was overall an atmosphere of respect between the two. The majority of the Manchester City fan base who’re old enough to remember that day will tell you that they’ve always respected us since that moment, which now brings me to the game yesterday. As I was leaving Stratford station to make the 15 minute walk to the stadium, I overheard many conversations between the two sets of supporters – mainly how they understand the current situation & frustrations amongst our fan base since the move to Queen Elizabeth Park, as it replicated a similar effect to their immigration.

Ray Woods, a Manchester City supporter, sent this in to me earlier today, explaining what it was like for their supporters prior to their stadium move:

“I actually signed a petition not to move to the Etihad Stadium (Common Wealth Stadium as it was known), in the Sherwood Bar, not too far from Maine Road. I wasn’t happy about the move at all, most City fans weren’t. In hindsight, it looks to be a good move, but I think most fans would have liked to have stayed where we were. It was a proper ground in a proper community, everyone knew each other and the atmosphere was top. City fans of that era, and before, fully understand the anger at West Ham, as we had a chairman called Peter Swales that had driven us into financial turmoil that would eventually lead us into the third tier of football. Like West Ham’s current board, although he may not have been responsible for all of our downfall, he was the catalyst for a traumatic few years. We’re without a doubt the luckiest set of supporters in world football now, but we also know what it’s like to be the laughing stock of world football. As I always say, our success isn’t the reason City fans love City. Success doesn’t define our club. Supporting your club lasts a lifetime, & whatever happens in between is all part of the journey. It’s the love for the club that defines a club, that’s why we have so much in common with the Hammers. I hope West Ham & it’s wonderful supporters get to where they need to be, and I sincerely hope you stay up and gain some success along the way. Maine Road with its imperfections will always be our home, and the Etihad will never feel like home. Will I ever be fully happy in it? Probably not! But I’m a football fan. We’re a strange but lovable breed, that’s why we will always respect the Hammers as they’re so similar to us. Best of luck! @Kippax73”

@Jxnnymcfc also wrote in to me today as he too feels the frustration on current affairs after visiting the London Stadium twice in as many seasons:

“West Ham have always been a club that City fans respect. For me, they’re a great club with a fan base that could rival the top clubs in the country. There’s always been a mutual respect there and they don’t deserve it.”

Although the Blue side of Manchester has had success in abundance since they moved into their new stadium, let’s not forget that it didn’t happen overnight. They left Maine Road in 2003 under a similar basis to ours. After five years of mediocrity & flirting with relegation, they were eventually bought out by their current owner for £210m. Albeit Monsour having oil wells scattered over the globe which boasts his bottomless pit of capitol, the club also recorded a loss of over £500m not so long ago. Unfortunately, success in modern day football is only possible with a huge financial backing, which is vastly becoming the end all & be all for club owners. Our current situation consists of losing sight to what is happening on the pitch in my opinion. Whilst i do understand football clubs need to be run like a business, there is also an obsession with earning as much money as possible whilst spending as little as possible, which is the problem we are currently facing and we simply cannot afford to scrape by on the bare minimum in this league.

It took five years in City’s new stadium before they were picked up by a suitable buyer, who has also gradually introduced their history, original crest, and respect of their supporters since the takeover…