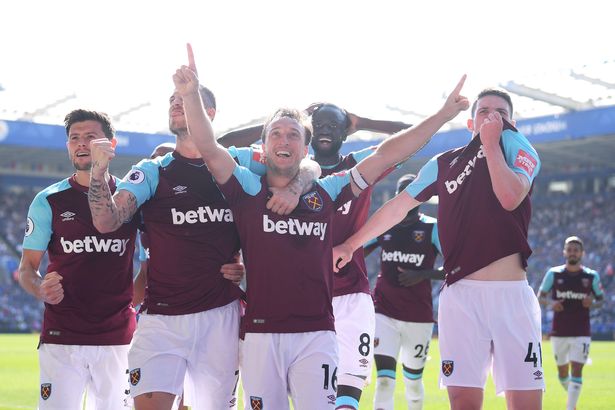 West Ham traveled to the King Power Stadium today and defeated Leicester City 0-2 in a late season Premier League match.  On a day where one club secured their relegation fate, West Ham hoped to pull away from joining them.  The East End supporters had to feel that they would have an easier go with nine first team Leicester players not featuring today due to injury or suspension.

Early on, West Ham played on the front foot: a stark contrast from the uninspired pace of the Manchester City match on Sunday.  The opening half, the Hammers had the edge in shots and maintained possession for much of the first 45.

In the 34th minute of play, Marko Arnautovic took a cross from the far side and pulled it back to Joao Mario in the middle of the area, who had an easy shot beyond the reach of Ben Hamer.

In the second half it looked as if Claude Puel would find his equaliser from his bench, as he brought on Dragovic, Gray, and Iheanacho all on early in the half.  But West Ham was able to increase their lead as Mark Noble received the clearance of a Joao Mario free kick.  Noble’s 25 yard half-volley found the far side of the goal, and gave the Hammers the 0-2 lead.

In the final minutes of the match, Moyes relieved both Lanzini and Arnautovic with Andy Carroll and Edimilson Fernandes, after the two starters appeared to be cramping in the day’s heat at the King Power Stadium.   Carroll showed good pace and was his usual imposing force defending set pieces inside his own penalty area.

Carroll’s best play of the day might have been his 45 seconds of time he wasted playing to the corner flag during the stoppage time.  Late in the match, Adrian was called upon for some tough saves, but the Spaniard preserved the clean sheet and West Ham are all but safe in the Premier League for another season.  Certainly, West Ham’s record at the King Power stadium isn’t impressive but the holes in the Fox’s starting XI gave the Hammers an opponent with which they could control the pace of the match and secure a vital victory.

With two matches to go, the future of David Moyes and many of the current roster will be intensely debated, but as a club, West Ham still need to put out their best side against Manchester United and Everton, as neither team has much to play for.  A couple of season-ending victories at the London Stadium would be a nice gesture to a group of supporters who have endured a very trying season.

Keep checking TheWestHamWay.co.uk during the week for all the transfer updates and other board moves over the coming month.