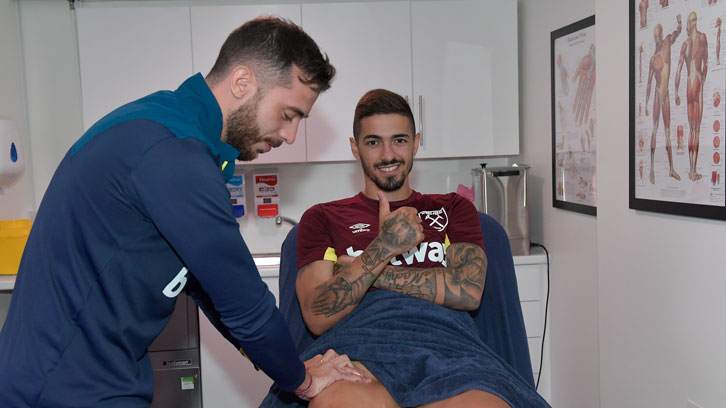 On recent results and performances, the team now seem to be able to gel to Mr P’s tactics and formation. In the grand scheme of things – considering all the new first team players – this has been relatively fast, too. Hats off to Mr P by all (bar Jose) – and to top it off, the complainers have gone into hiding – although the board still deserve criticism for not giving Rice £50k, no questions asked, and not rejecting entry to anyone found wearing other teams clothing in the home end…but that’s another article entirely.

We play well, have confidence, make less mistakes and have team spirit with the right amount of individual style – but when all is going so well, where does the forgotten man fit in? Our other Argentine, held in such high esteem by some that he was one of our, if not our best player in recent times – Manuel Lanzini.

To answer this we have to analyse his best position. This is Central Attacking Midfield – fact. Now the obvious conundrum we have is that position in Mr P’s tactics doesn’t seem to exist. Looking at our successful games we seem to favour 4-3-2-1.

So could Lanzini slot into Left Attacking Midfield? He has been occasionally used here but I don’t particularly think he’s the most versatile player – and as we know our best team now, this is Anderson’s spot. Snodgrass seems to be backup, too. So unless we are struck by injuries I don’t think this is practical –  and we only have to remember Bilic playing Hernandez there to know it can go wrong.

How about Right Attacking Midfield? Unfortunately, I don’t know if this would even work. Unless he’s given a bit of a roaming role, maybe it could, but we’d be a bit exposed there. Besides, with Yarmolenko as first choice, Antonio as backup, there’s also Snodgrass and even our youngsters waiting in the wings (Nathan Holland, etc).

Considering the above, we can come to the conclusion that he has to be central midfield – but how would we put Lanzini in the centre?

The central midfield seems to have different roles depending who we play against. Rice is always playing and, if anyone is given a defensive midfielder role, it’s rightly his. This leaves the other two options – where Noble and Obiang currently play and where Wilshire has failed to impress so far (and likely will be the Carroll/Reid of our midfield for being a sick note). Noble is perfect for our most central midfield role. We saw with his assist against Man Utd that if he can boss the midfield and make a pass like that he doesn’t need to go forward, plus it’s less running for him. So he stays.

I like Obiang, although he has been guilty in some very bad misses in his long shots recently, where other options were available. I’m not really sure where his best position is. He can play well for the team – but he is the most likely casualty when Lanzini is fit. As soon as he puts a foot wrong, or gets sold, or gets (inevitably) injured, he’s off the first team sheet. And let’s not forget, with the injuries we have (Sanchez is a very bad one), Mr P might have no choice throughout the season and only ever have 3 central midfielders fit at any one time! We are West Ham, after all.

Is all this in vain though? Who’s to say we will get the same player in Lanzini back? He could be another Cresswell and Antonio, returning from injury as shadows of themselves. With that in mind, the following is the likely option: we’ll see Obiang and Lanzini battle for the 3rd midfield spot. Lanzini probably wouldn’t be playing much deeper than he’s used to anyway. This is because of our high defensive line and his pace, and it could work well and even improve how we are at the moment.

It may mean more of a triangle of Rice and Noble at the same depth with Lanzini ahead of them, which could be a concern in our more defensive games. As we know, Rice as a defensive midfielder makes us solid – but maybe you could give more freedom to Lanzini and have Anderson and Yarmolenko stay back a bit and play through the middle?

Either way, I think providing he’s the same player he was before the injury, and with Obiang having one eye on moving to Italy, there’ll be a transitional period in the new year for Lanzini taking that spot. If he doesn’t…there’s always Right Back.

After all, it’s the West Ham Way.