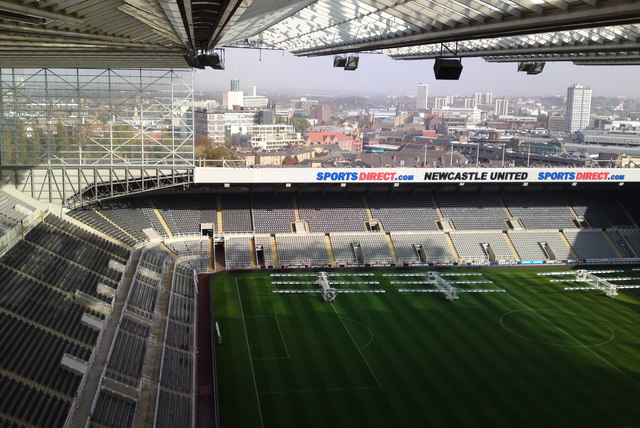 We head into a “straightforward” run of games starting with Newcastle, who had a tough start to the season but have started to pick up points and wins. We really need a win here to start our season properly, and I feel a win here would really help us achieve our targets.

This massive stadium dominates the skyline of Newcastle, after the renovation of the stadium in 2000 the roof of the stadium was the largest cantilever structure in Europe. The roof allows natural light to come through which is rather unique. There are three statues outside the stadium which are worth seeing of Jackie Milburn, Alan Shearer and of course Sir Bobby Robson (this statue also has a handy ATM nearby).

Be warned that some of the metro trains going to St James’ via Monument, it’s only advisable to board these trains if you have trouble walking as it’s most likely easier and less time consuming to walk directly from Central station.

Car: When coming to the end of A1 (M) carry on to the A1 North then the A184. Keep going then bear left onto the A189. Go over the River Tyne, while on the Redheugh Bridge you can clearly see the stadium. Carry on the dual carriageway which leads straight to the stadium.

Parking: As the stadium is central to Newcastle there are plenty of pay and display car parks around the area. One of the recommended places to park is Newcastle College which holds about 400 spots. This is a 10-15 minute walk away from the ground and costs £4 which is paid on entry. It’s always covered by security so you can feel safe with your car there. To get there, after crossing the Redheugh Bridge (read car directions above), turn left at the next set of traffic lights onto the A695 which is signposted Blaydon/

As the stadium is located in the middle of the city centre, there are plenty of places nearby to go to. The most popular pubs for away fans are near the railway station, but some of them only allow away fans if they have no colours on display and no children. The Head of Steam pub is listed on the CAMRA good beers guide, so that proves a popular pub. There’s also a former Wetherspoons called the Union Rooms, which is family friendly. Gotham Town and Victoria Cornet are pubs in the area that do not allow any away fans.

The concourse at the stadium is rather spacious and offers chicken Balti pies, ‘Mag’ pies, mince and onion pies, peppered steak pies and cheese and onion pies for any vegetarians. A wide variety of alcohol is served too, in the form of Carling (£4.50), Coors, Kingstone Press Cider (both £4.40), Kingstone Press Wild Berry Cider (£4.70), Wine (£5 all varieties), gin and tonic (£5.50) and Jack Daniels and Coke (£6).

As always stay safe on away days and support our players; even though you will be seated quite high and far from the pitch you can still make yourselves heard. COYI