A disappointing result and first half performance as we missed the chance to go third with individual errors costing us dear, real character will need to be shown by the squad over the last 6 games starting with FA Cup finalists Chelsea next Sat evening;

Fabianski – 4 sadly he will remember this game for the mix up in conceding the first goal but even worse dropping a corner kick, at a comfortable height, under no pressure, at 0-1 going into half time it might just have been a different result;

Coufal – 6 defended ably enough but never managed to get any decent crosses in going forward and fired a good headed chance second half straight at the keeper;

Dawson – 3 recent performances had been leading to something like this, another early yellow card and soon after naively picking up a second and early bath – will now be suspended for Chelsea which will probably see a return for Balbuena;

Diop – 5.5 a mixed game, comically falling over his feet to concede the first but taking his headed goal well, at times couldn’t cope with the movement of the home attack;

Ogbonna – 6 didn’t start well letting a simple pass through his feet and out of play but for the most part defended well, notably an early headed clearance at the back post;

Johnson – 4.5 not a game he’ll want to remember bar a decent cross for Coufal and smart clearance off the line, that apart struggled to offer decent service going forward and caught horribly flat footed for the Newcastle winner where he simply failed to jump or attack the ball;

Noble – 5 one glorious cross field ball to Coufal second half but otherwise no impact on game and pace exposed time and again most notably in trying to track back for Newcastle’s opener;

Soucek – 6 arguably looks tired now after a long season, we are seeing much less of him as an attacking force and struggled to maintain the home counter attack, was pivotal in winning our VAR awarded penalty;

Fornals – 6 another who looked like game time was maybe catching up on him, some loose passing and a decent half chance screwed wide first half;

Bowen – 6 after a quiet first half put in a better shift in the second and lovely chipped assist for Diop’s header, awful wayward pass led to Dawson’s first booking;

Lingard – 6 his least effective game for us, tucked the penalty away well but resorted to long range shots that never tested the keeper, forced off near the end with what looked like a bad case of cramp after he had put in a big running shift trying to cover for us only having 10 men.

Benrahma (72 mins for Noble) – 5 saw very little of the ball and once again made no impact;

Lanzini (87 mins for Lingard) – on for ten minutes but no mark as not too sure he actually had a chance to touch the ball; 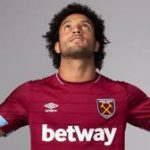